Fire It Up! reviewed by Steve Jones 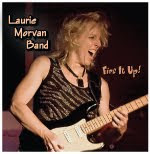 
Laurie Morvan and her band were finalists in the 2008 IBC both as a live band and for the best self-produced CD for “Cures What Ails Ya” (her 3rd CD), the only act to become a finalist in both categories.  The reason for this is quite simple and obvious when you hear them- they are a truly great band with truly great songs!

Laurie wrote all the cuts again on this new 4th album; she has a keen edge to her lyrics, both in the serious and lighter veins.  “Skinny Chicks” sings of the up sides of skinny girls, something Morvan thinks important because of all the time spend by blues singers focusing on big legged women and such.  “Come Over to My BBQ” is also lighter in tone, filled will double entendres like she’s “gonna put up her tenderloins” and that “your cold cuts will never be the same”.  It’s nice to see these sorts of blues songs from a woman’s perspective, especially one as talented and confident as Morvan.

The opening and closing tracks are cut from similar molds, with fiery hot licks and a driving blues rock beat.  “Nothin’ But the Blues” offers up a testimony to her love the blues genre and “Café Boogaloo” sings of a jumpin’ juke joint.  The former features some really hot guitar and piano solos while the latter offers steamy guitar and organ solos.  These songs seem to hearken a bit to Stevie Ray Vaughn in being bigger, production number blues rock songs.  Morvan also sizzles on her slow blues in cuts like “Livin’ in a Man’s World” and “Good Girls Bad Girls”.  Her vocals remind me a little of Marcia Ball and her guitar is as fluid and smooth as anyone’s.

In addition to Laurie, the band consists of Pat Morvan on bass. Kevin Murillo on drums, and Lisa Grubbs and Carolyn Kelley on backing vocals.  Sammy Avila fills in on B3 organ on several cuts while David Matthews also does B3 and piano on a few others.  They are a tight, focused and closely knot band playing solid, hot road house style blues.  Hailing from Illinois , they are now touring more widely and are gaining fans across the nation with their outstanding play.  Highly recommended!!!
Posted by Crossroads Blues Society at 1:26 PM