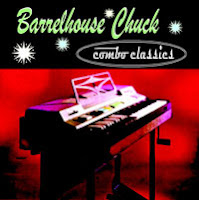 When I was growing up a lower middle class Irish-Italian kid in New York City, few families could afford big Wurlitzer or other in home organs. Much to their chagrin, many an Italian kid who had aspirations to play something with a keyboard were awarded an accordion. But then came the combo organ. Vox, Farfisa and others took the concepts of the organ, accordion, transistors and bright colored plastic to create a portable organ that musical combos could use. Those were heady days; with the advent of the transistor replacing the old vacuum tubes, equipment and electronics got lighter and easier to move and transport. No longer would keyboard players have to rely on the old out of tune house piano at their gigs. A new age was upon us musically.

Blues musicians embraced and adopted this new fangled device as did the rockers like the Spencer Davis Group, Traffic, the Doors and others. In the liner notes Chuck comments on the fab song of his youth, ”96 Tears”, by ? and the Mysterions that he played in every juke box he saw. Later on, Otis Spann became his Farfisa role model with his recording of “Ain’t Nobody’s Business” with drummer S.P. Leary. Chuck includes a passionate and lilting version of this (with S.P. again on drums!) on this album.

Barrelhouse Chuck pays homage to that 1960’s classic instrument by packing up all his great songs featuring the combo organ and giving us this great new CD “Combo Classic”! A very 1960’s looking photo of a combo organ adorns the CD cover, and inside and on back we have a beautiful, bright red compact combo organ of Chuck’s. Behind the CD in the jewel box we have a classic advertisement for “the new Rheem stereo compact combo electronic organ.” What a cool package, but cooler yet is what’s on the silver disc inside the package.

Chuck offers up thirteen prime and classic cuts of his combo organ virtuosity. He’s got hot newer stuff along with some of his older works on the combo and they are all hot stuff. The Spann classic includes Billy Flynn on guitar along with exquisite vocals by Chuck and Bethany Thomas. He lends his unique Farfisa sound to the Ventures “Walk Don’t Run 69” where he, Flynn and Kenny Smith give us that beach classic Lake Michigan styled!

“Depression Blues” gives us some relevant commentary on today’s economic woes, where Chuck laments about people being laid of by the thousands as he makes the Farfisa sing also to us. Backing him again are Flynn and Leary along with Hash Brown on guitar, Todd Levine on harp and Rick Holmes on bass. He offers up the Farfisa on two newer cuts with the Swedish Trickbag group to open the album. Earl Hooker’s “Hot and Heavy” and what I like to call an original Swedish-Chicago surf tune called “Pacific Blue”. Good stuff just oozes from all over this CD.

The Goering-Flynn original “Chuckabilly-Live” features two amazing instrumentals where the instruments actually seem to talk to us. Chuck’s organ and Flynn’s guitar seemingly sing out to and grab us in this cut. Chuck goes to the Lowry organ to do the “Bright Sound of Big Moose”, a super Johnny “Moose” Walker cut. Nick Moss joins Chuck on three tracks and sings on two of them, his own “Porchlight” and James Cotton’s “Slam Hammer.” Curtis Salgado’s wicked harp adds so much to these tracks, too. Lynwood Slim does the singing on the other song, the J. Haliday-Ray Charles classic “I Choose to Sing the Blues”. Chuck hits us with an R.M.I. and Rheem on the first two and a Vox on the third. Classic stuff done by a man who has exerted full mastery over the combination organ, perhaps even more so than he has the piano! Space does not permit comments on every track, but suffice it to say all thirteen are equally special. I do have to mention, though, the Barrelhouse Chuck tribute to the great Stevie Winwood that he closes with, where Chuck plays the Farfisa on his “Farfisa B3 Boogie for Winwood”; classic stuff!

Run, do not walk, to the CD store (or even faster, run to your computer) and get this CD today. You won’t regret it. This is blues and early rock organ at its’ finest and no one- NO ONE!- does it better than Barrelhouse Chuck!

Posted by Crossroads Blues Society at 11:44 AM