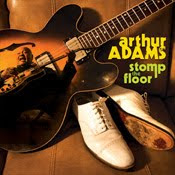 
Arthur Adams has been a great gospel and blues man for a long, long time. His current long standing stint as BB King’s house band leader in Universal City has made him a fixture in the LA/West Coast blues scene. He landed in LA in the mid sixties after spending a lot of his early career touring around the south; he released his first album in 1972, which made his smooth voice and guitar picking in demand. He’s done session work with many greats in music and television, but he and BB seem to be joined at the hip for a variety of projects. He appeared on tour with the Mannish Boys after the first Delta Groove release ever in 2004 and then Randy Chortkoff invited him to appear on Mitch Kashmir’s debut album. This is his first album with Delta Groove and it is a very sweet effort.

His voice is a mix of Robert Cray, Bobby Bland and a non-falsetto version of Aaron Neville. There is a smoothness and sweetness to his voice that evokes deep emotion and feeling. His guitar style is more in the BB King vein, with clear and precise notes and phrasing; not too many notes like some gun slinging axe wielders try to use to impress people. He chooses his words and notes with care and warmth and then bundles his music up in a velvet wrapper so the listener is rewarded with a profound listening experience.

I like Arthur at his smoothest. These 12 tracks are all originals and all are quite good, but when he goes to the slow ballad it really, really is nice to listen. “I Know What You Mean” and “Nature of the Beast” are two melodic tracks that are so easy and smooth I felt like I was getting covered in a warm, buttery glow. His slow blues like “Don’t Let the Door Hit You” remind the listener of BB King on guitar, making the frets wail with emotion to match his soulful voice. Tunes like the title track and “Thrive on Your Vibe” give us a soul-filled and funky take on Adam’s music. The instrumental “Around the Sun” also shows us another side of Adams, this time more in the way of a George Benson approach to funky guitar. He closes with a more up tempo instrumental following this one called “Blue Roots”, which is interesting in that he does not sing on the last two songs. It does not matter, because they contrast each other nicely and showcase a man who is at equal ease singing or picking on his guitar.

This is a well done CD that features a man who is superb at his craft. Arthur Adams is a soulful and funky blues man who delivers a sound and style that is rich in style and beautiful to listen to. I recommend this to all blues and soul fans who love a good, funky, original album; this guy’s got a great set of tracks assembled that you should not miss!
Posted by Crossroads Blues Society at 1:39 PM