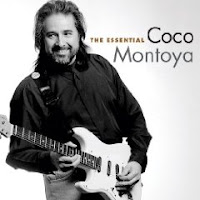 Coco Montoya grow up in California and starting out his music journey playing rock and roll on his drums but somewhere along the way mastered playing blistering blues on the guitar. He got a break in the late 70's when Albert Collins asked him to help out on an upcoming tour. This was a great learning experience where he was able to study under the Master of the Telecaster.

He later had an other big opportunity in the mid eighties to play in the newly reform Blues Breakers. The musicians he met in both bands later help out on his first solo releases with Blind Pig Records. The songs on this CD where produced by Coco himself and represent his finest work at a time when he won an award for Best New Blues Artist at the Handy Awards in 1996.


His career has spanned 30+ years and the hand picked 12 tracks on this CD cover some of his handiwork from the mid nineties. Four out of the twelve are originals. All the songs originate from three albums: Gotta Mind to Travel (1995), Ya Think I'd Know Better (1996) and Just Let Go (1997) all with Blind Pig Records.
Coco plays lead guitar and vocals on all tracks but does shares duties with other guest musicians. He has help on four tracks from Debbie Davies on rhythm guitar. She too was cut from the same mold by playing with both Albert Collins and John Mayall.


If you are looking for early solo music from Coco this one CD will fill the spot in your collection.
Posted by Crossroads Blues Society at 2:01 PM