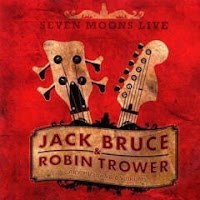 
“Seven Moons” was a somewhat psychedelic rock studio effort last year that Jack Bruce and Robin Trower, along with drummer Gary Husband, created to some decent critical acclaim. “Seven Moons Live” gives us live versions of nine of the eleven songs from “Seven Moons”, along with three Cream tracks and one track from Trower’s and Bruce’s good but somewhat forgettable 1981 “B.L.T.” album. Live albums are always a great measure of how performers really sound and this measures up as a solid effort from these two rock icons. This album was taken from the third stop on their tour, but the chemistry was already firmly in place as Bruce notes in one of his aside comments on the CD.

The “Seven Moons” tracks are all solid. Bruce’s vocals are crisp and compares well with the studio version and showcase that this fantastic vocalist and bass player can still deliver great stuff after four decades of performing. Trower’s guitar work is nothing less than impeccable throughout, giving each track a sense of what a man with equal experience and talent to Jack Bruce can bring to a song. The songs themselves are all very good but not as memorable as some of their earlier work. That does not negate that they are good, it’s just hard to top their extensive library of great songs. They launch the album with the title track, then follow along with “Lives of Clay” and “Distant Places Of The Heart” as in the studio album. This trio of songs is very solid and opens the show much to the crowds’ pleasure.

The covers give us another side of the band to admire. Jack Bruce sings on all tracks, and gives some really great performances on these covers. “Sunshine of Your Love” is next up and it is very interesting to hear Trower’s somewhat restrained but still powerful take on this classic. The B.L.T. track “Carmen” is hauntingly and lamentfully sung by Bruce, and he and Trower play sublimely together on this cut.

They follow with seven tracks from the studio CD and then close with “White Room” and “Politician”. The “Seven Moons” tracks are well crafted stuff, but they seem to turn it up a notch again for the covers. The guitar intro on “White Room” is uniquely Trower giving us his take on Clapton, and Bruce delivers on the vocals and super base line. The tempo is just a bit slowed down here, making the song fit more into the tone of the new stuff. “Politician” gives us Bruce at his best again, even referencing Mr. Obama in the midst of one verse. Solid stuff from two veterans of over forty years on the rock and roll trail, and there is also a DVD of the show available on Ruf Records. Fans of Bruce and Trower will certainly love this set of tunes and those new blues and rock fans needing an intro to these artists can’t miss by listening to this CD!
Posted by Crossroads Blues Society at 2:05 PM