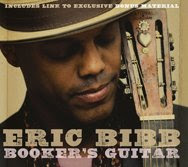 
I must begin this review with a little blues history. Booker (aka Bukka) White was well known for playing National steel guitars. His name, much to his chagrin, was misspelled in 1937 by Vocalion, his second record label, and it stuck with him for the rest of his life. The cousin of BB King (who gave BB his first guitar, a Stella) was a consummate blues man and slide guitar player. Eric Bibb met a man named Keith while touring the UK who offered Eric a chance to play Booker’s guitar, affectionately named “Hard Rock” by Booker. Keith and Booker became friends during the American Folk Blues Festivals that exposed the kings of the blues to Europe back in the 1960’s. After meeting and recording Booker on cassette and exchanging countless letters, Booker sent “Hard Rock” to Keith as a gift shortly before he passed away in 1977. Keith has protected and kept the fabled instrument, and even showed it to BB King who remembered it sitting in White’s place in Memphis many years go. Bibb fondly remembered the experience and later wrote the song “Booker’s Guitar” with the intent to record it while playing the guitar, which he has done. Along with the title track, Bibb has recorded 15 tracks along with a second promo CD of 3 bonus tracks (one for itunes and two as bonus downloads for CD buyers). Set for release in late January, 2010, Telarc Records and Bibb join up for their fourth album together.

The title track is an interesting story about the guitar, Booker’s heart shaped charm that he affixed to the guitar, the old dirty brown case it lived in and the scotch taped play list on the case. Bibb sings and plays almost reverently, with the sweet sounding notes coming off this 75+ year old guitar like it was new. Eric is a master at solo acoustic blues and here he gives us a humble and humbling performance. His three decades of experience melt away as he plays this song and Booker’s guitar. I found it quite moving even though it was a studio recording.

So where does that leave us? Well, it is the first song on the CD, so we are girded and ready for 14 more tracks delivered as Bibb only can. He plays with a thoughtful and metered approach to his music. Never showy, his guitar and occasion harp are given to us to listen to, mull over and accept. His voice takes on the same timber as his guitar, restrained yet powerful, in control but with a maelstrom of power and intensity living behind it. Whether it be slow blues, folk, a little boogie woogie, in an old spiritual style or whatever, we are listening to a man who knows his craft well. There is no need for flashiness or bravado; his soul-filled baritone voice and impeccable guitar work speak volumes. He picks and plunks his way through each track like the guitar master that he is, selecting each note as a shrine to the music he plays.

Singling out other particular tracks would be futile. Each delivers to us a story that must be heard, whether he sings of water tasting like turpentine instead of cherry wine or about sitting on the porch in the shade and talking about his new rocking chair, we are listening to a man with a set of stories to tell us and we are compelled to sit and listen to each and every one of them. Folk blues at it’s finest; Bibb and Telarc have produced another fine album here that will be listened to over and over in sublime and utter joyfulness as Eric lives his
Posted by Crossroads Blues Society at 1:29 PM