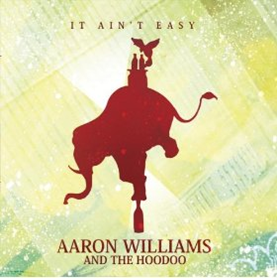 What’s the Hoodoo all about? It’s all about three young guys from Madison, Wisconsin who play some roadhouse style blues-rock-funk that will make your toes tap and hips shake! Aaron Williams leads the band on vocals and guitar, Eric Schackelford also sings and plays the drums and “Z” plays bass and provides some vocals, too. They are a tight little trio backed up occasionally by some of their friends and they deliver some hot and steamy blues.

I first listened to this CD while traveling home from the Mississippi Valley Blues Festival late Saturday night/Sunday morning after three days of blues music. I left Davenport and I was barely across the bridge to Moline from Bettendorf when I put the CD in to play. I was tired but happy after the festival but needed something to get the blood pumping at midnight. The opening chords of “Hypnotize” told me this was not going to be a CD for the faint of heart. They continued to pump out some intense music in the second track, “Seven Days” and by the next song (the title track) I felt like I’d had a couple of cups of Joe in me!

The driving guitar and beat are the hallmark of these rocking blues lads. Williams’ guitar licks are sweltering and the groove backing it makes your heart pump quickly. These guys are also quite unique vocally, with a punky, often nasal tone to their songs. They sometimes reminded me of how Jim Morrison delivered some of his Doors vocals. The title track brings in some nice background vocals to add depth to the song and they use them well on other tracks, too.

“Living on Love” introduces us to the softer side of Williams and band. Acoustic guitar and some laid back vocals are complimented nicely with the addition of Cadillac Joe Anderson on Hammond B3 organ. The song flows into a strong river of blended vocals, organ and guitar picking. This is the only down-tempo track on the CD, and it nicely shows that the guys have some variety in what they can deliver.

The guys lay out some funk on “Porterhouse 650”, with some rapping lines that talk about both their steaks and their women. “Drinking Blues” gives us some rockabilly licks with Aaron screaming out the chorus line “I’ve drinking blues!” with the band echoing his “problem.” It’s non-stop action; the remaining tracks are equally hot and are just as much fun as the others!

The guitar work by Williams is sweet as it motors thorough each tune in a hot charging, rev-ed up style. By the time the album finished I was almost halfway home and wide awake, so I queued it up for another play. I have listened to the CD a few times now and I appreciate it more and more with each subsequent play. It is an excellent set of original tunes in a cool carney-circus graphics laden package featuring tattoo art of a buxom tattooed lady on the back cover that makes the packaging as roadhouse as the sound within it. If you want your blues hot, sweaty, and rocking then this is a CD for you!
Posted by Crossroads Blues Society at 7:39 AM