Give ‘em as Little As You Can…As Often As You Have To…or..A Tribute to Rock ‘n’ Roll reviewed by Steve Jones 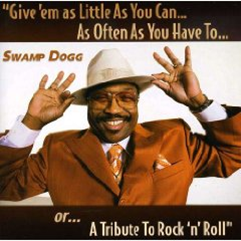 Give ‘em as Little As You Can…As Often As You Have To…or..A Tribute to Rock ‘n’ Roll
Swamp Dogg
Self-Produced
www.swampdogg.net
12 tracks/

Jerry Williams, aka Swamp Dogg, may be nuts. He’s gotta be one brick shy of the proverbial load. In more modern parlance, his Happy Meal is perhaps one or two fries short. A distinguished songwriter and music man, he’s been around forever and now releases CDs as the mood hits him and I don’t know what kind of mood he was in here. We find him doing a dozen rock standards of various sorts in his own, err, style? Hard to tell. This is an eclectic collection of rock standards done in some weird styles.

The CD begins with a funked up and heavy rockin’ “Ain’t That a Shame”, with heavy solo guitar lines and William’s screaming vocals. It’s weird but it’s palpable. Jimmy Reed’s “Ain’t That Lovin’ You Baby” (sans the “Baby” in the title listing here) is slowed done a bunch but shouted out quite loud by Swamp Dogg in a frenzy of chords and vocals. “Johnny B. Goode” is next and it ain’t Chuck Berry-like in delivery. Over-laid vocal tracks and synthesized funky sounds almost harass the listener while some mean guitar is being laid down amongst it all, another overdone piece of work that gets one wondering “why?” But I persevered.

Jerry Lee Lewis was murdered next. “Great Balls of Fire” had some more great fuzzed up guitar licks but the song overall was just shouting and hollering in a seemed attempt to be different. “Heartbreak Hotel” is served up next in a swamp funk so thick that I think I felt some Spanish Moss hit me in the head. Springsteen’s “Hungry Heart” gets the business next. Jerry tries to turn it into a thoughtful soul song but to me it just falls flat.

“I Shot the Sheriff”, “I Wanna Hold Your Hand”, “My Girl”, “I Never Loved a Woman (The Way I Loved You), “Satisfaction” and a visit to his old song (slightly updated) “Total Destruction of Your Mind 2009” all fall short for me, too. The songs are a bit overdone and the Dogg’s vocals are failing. Then I thought, “Maybe this is all tongue in cheek,” but I don’t think so. I don’t know what’s really going on here. As a tribute to rock, Swamp Dogg certainly puts his own spin on these tracks, so there is no denying that he’s doing something new with them and really going out on a limb with these covers. But his cracking, straining vocals and overdone production really are not my cup of tea. I was intrigued by the first few tracks but then it stopped growing on me. If you want something different with blues and R&B, this is certainly it!
Posted by Crossroads Blues Society at 7:38 AM