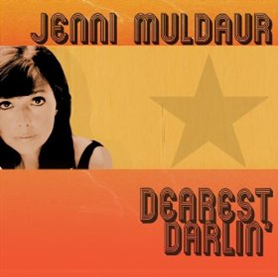 It should be no surprise that the daughter of Geoff and Maria Muldaur is an accomplished singer in her own right, having worked with the likes of Eric Clapton, Marianne Faithful and Todd Rundgren. It’s been seventeen years since the release of her first solo recording and Jenni Muldaur returns with a vengeance. She has selected a batch of songs that span the decades with many tracks having a strong R&B influence. Her sassy voice has a higher pitch to it that at times make Muldaur sound like a young girl. But in the next breath, she can shake the rafters with her powerful singing.

Muldaur gets excellent support throughout the project from a star-studded cast of musicians. The late Sean Costello is on guitar, Brian Jackson on keyboards (Gil Scott Heron), Brad Jones on bass, James Wormworth on drums (Tonight Show Band) and Lenny Pickett on sax (Tower of Power). A variety of guest musicians and backing vocalists make sure that the arrangements are fleshed out and present Muldaur in the best possible manner.

Opening with a couple of mournful shouts, Muldaur digs into “I’ve Got a Feeling”, a tune done by Big Maybelle. Her energetic vocal rides the slinky rhythm, punctuated by horn accents. “I’d Rather Live Like a Hermit” is a jump blues obscurity featuring some of Costello’s fine guitar work. The title track is a Bo Diddley number done as a duet with Muldaur’s perky singing contrasting nicely with Joseph Arthur’s deeper tone. On “You Got Me Uptight”, Muldaur forceful singing pushes her voice to the point of breaking as Jackson’ keyboard work dances around the arrangement. Her performance on “There’s Another Place That I Can’t Go” perfectly captures the resignation of a lost love.

Many singers have tried to cover James Brown material and failed miserably. Muldaur’s version of “Lost Someone” comes up a bit short as she can’t quite summon enough power to match the razor-sharp accompaniment from the band. She closes the disc with her original tune, “Comatose Town”, a ballad that gets a lilting, upper register vocal that provides a dreamy conclusion to the project.

Whether strutting her stuff on “Just Ain’t No Love” or leading the acappella chanting on “Hopali”, Jenni Muldaur sings with a maturity that comes from being surrounded by music all of her life. She can make you feel the pain in a song’s lyrics or get you in the mood to get out on the dance floor when she and the band cut loose. There is plenty to enjoy on this solid release. Let’s hope we don’t have to wait another seventeen years for another release from Jenni Muldaur.
Posted by Crossroads Blues Society at 7:59 AM