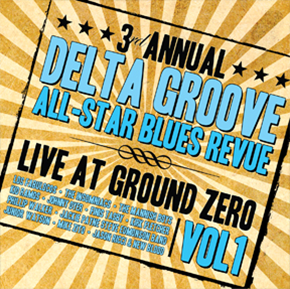 For the last few years, the Delta Groove label has thrown a big party the weekend after the Blues Music Awards ceremony. Held at the internationally famous Ground Zero club in Clarksdale, MI last year, the event features the stellar roster of musicians that record for the label, many of whom were nominated for various awards. With over twelve hours of music performed in one day, these discs feature two hours worth of highlights that showcase the amazing talent that label head Randy Chortkoff has put together. 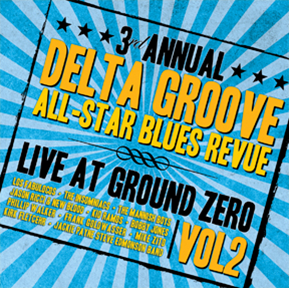 The first disc opens with a Tex-Mex version of “I’m Gonna Be a Wheel Someday” with Kid Ramos on guitar and featuring Jesus Cuevas on accordion and lead vocal. Next up is the label’s hot discovery, The Insomniacs, with the humorous “At Least I’m Not With You”. The group’s swinging approach is a refreshing change and their second contribution, “Description Blues”, serves notice that they are equally adept on slow blues numbers, with Alex Shakeri displaying his impressive keyboard talents. The Mannish Boys get three tracks, each with a different leader. Johnny Dyer settles in to a deep groove on “Everything’s Gonna Be Alright”, his hard-driving harp matching the intensity of his singing. Finis Tasby picks up the pace and nails the vocal on “Lonesome Bedroom Blues”. Kirk “Eli” Fletcher burns through a rousing instrumental version of “Lucille”.

Several highlights include a storming “Street Walking Woman” from guitarist Phillip Walker, who plays with passion and skill rarely found in seventy year-old musicians. Junior Watson tears it up on guitar on “Wolfpack” and Mike Zito almost matches Watson’s performance on “Dirty Blonde”. The Jackie Payne/Steve Edmonson Band sports a two piece horn section and inject plenty of soul into their interpretation of “She’s Nineteen Years Old”. The energy level gets ratcheted up several levels on the closing track as Jason Ricci and New Blood play “Shake Your Hips” as if their lives hung in the balance. Shawn Starski is magnificent, his guitar solo setting the stage for Jason to unleash one of his patented mind-melting harmonica solos.
Vol. 2 continues the magic with the Insomniacs opening with the up-tempo “Stick Around” with lead singer Vyasa Dodson staking his claim for consideration as a guitar slinger. The band gets some audience participation on “Broke and Lonely”, with more fine guitar work from Dodson. Not to be outdone, Kid Ramos leads the Mannish Boys on the instrumental showcase “Johnny Cochino”, his guitar steadily building the intensity level until the band suddenly shifts tempo and Ramos continues to squeeze razor-sharp licks from his instrument. Veteran singer Bobby Jones gets his opportunity to shine on “Mary Jane”, with Chortkoff on harmonica. Phillip Walker turns in another impressive performance on “Lay You Down” and you wonder why this marvelous musician isn’t better known. Ricci and New Blood slow things down on the soulful “I’m a New Man”, a track that serves a subtle tribute to Lou Reed. Starski delivers a flowing guitar solo that sets the stage for Ricci to deliver another demonstration of his prodigious skill and technique on the harmonica. The party ends with Los Fabulocos rockin’ the house on “Burnin’ the Chicken”, with Ramos doing some chicken-picking licks on his baritone guitar.

Both discs are a lot of fun and serve as a testimonial to the amazing amount of musical talent on the Delta Groove label. More importantly, it makes me want to spare no expense to make sure that I am at their party next year.
Posted by Crossroads Blues Society at 8:01 AM