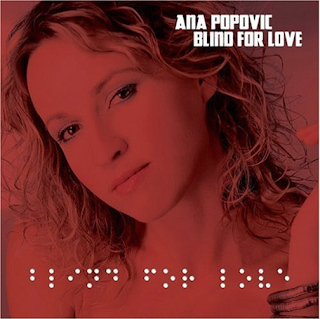 One of the most electrifying performers today is Europe's Ana Popović. I was first introduced to Ana after talking to the leader of Norway's blues group The Tubesnakes. Lars Vad convinced me to listen to Ana so I picked up her cd Hush. After listening to her 2002 release and seeing her live at Bamfest in Belleville Wisconsin, I was a believer. Her performance was absolutely explosive. I have never seen a performer with that much energy at any concert.

Ana was introduced to the blues through her father's extensive record collection and early sessions at home. Within a year after starting a band, she was opening outside Yugoslavia for blues greats like Junior Wells. In 1999 she relocated to the Netherlands becoming well known on the Dutch blues scene.

Ana opens Blind For Love with her passionate blues voice on "Nothing Personal" also performing on guitar like a true experienced professional. She kicks it up a notch as she rips into "Wrong Woman" absolutely setting the guitar on fire. "Steal Me Away" is a traditional blues number with her background vocals creating almost a gospel sound. The title track "Blind For Love" shows the versatility of Ana Popović as an artist. This track and "More Real" displays her soft enchanting voice and her ability to play superb acoustic guitar. "Putting Out The APB" give us another side of musical ability with her remarkable slide guitar work. She once again thunders into the selection "Get Back Home To You" with her strong guitar riffs. Her jazzy seductive voice reappears in "The Only Reason" and "Part of Me (Lullaby For Luuk)". "Lives That Don't Exist" gets down and funky giving us yet another look of Ana music capabilities. Blind For Love rocks with "Need Your Love" and concludes with a low down blues number "Blues For M", completing a fabulous collection of blues, rock, jazz, funk, and gospel.

If you have never seen or heard Ana, you owe it to yourself to pick up her new cd Blind For Love and catch a live performance.
Posted by Crossroads Blues Society at 7:54 AM