I Got The Blues For You reviewed by David Stine 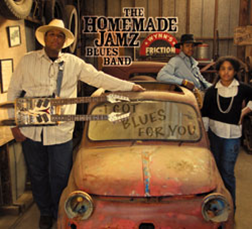 I Got The Blues For You
Homemade Jamz Blues Band
Northern Blues Music www.northernblues.com
12 tracks/55 minutes

I tend to shy away from artists that receive a lot of hoopla out of the gate. The blues community, it seems to me, is always looking for the next big thing. And the next big thing always seems to be young blues prodigies. So pardon me, but I bypassed the Homemade Jamz Blues Band initially simply because I’d heard too much about their youth, homemade instruments, and race. They were the darlings of last years’ blues fest circuit, so I avoided getting interested. I’ve learned my lesson.

Their second CD, is titled “I Got The Blues For You”. This is my first exposure to the group, and I must say it‘s really enjoyable. The HJBB, as you know, are siblings Ryan Perry (guitar and vocals), Kyle Perry (bass), and little sister Taya Perry (drums). They are 17, 15, and 10 years old respectively. On this CD their father Renaud adds some tasty harmonica on a handful of cuts. Renaud is also the builder to the guitars used by Ryan and Kyle that began life at twin exhaust-type car mufflers (while I’m on the subject, listen to this CD with headphones to really hear the unique quality of Ryan’s double neck muffler guitar--quite nice!). The CD, besides being engaging, is generous in length at 55+ minutes and 12 songs. All songs were written by daddy Renaud except song 11, Titus Turners “Grits Ain’t Groceries” (a very funky version, I might add). Obviously, this is a VERY musical family.

The CD kicks off with a “Thrill Is Gone” groove entitled “Hard Headed Woman.” Ryan Perry tends to run his words together, so I popped on the headphones and “har hey woman” became “hard headed woman.” Renaud Perry doesn’t write any earth shattering new blues lyrics, but the band’s performance makes them fresh and funky. Song two, “Rumors,” allows dad to add harp to some nice guitar work by son Ryan. This is a nice juxtaposition of new and old: old school harmonica licks augmented by wah wah guitar. Welcome to the brave new world. Luckily, the CD doesn’t try to be too new, rap or hip hop infused, or clever. The songs work from progressions we’ve heard and themes used before: from king snakes, to hobos, to hard drinking women, to “going down to Clarksdale.” In the hands of less talented kids, I’d roll my eyes and pass on. However, the youthful enthusiasm of these youngsters jumps from the disc and you almost feel the joy they felt while it was recorded. Ryan Perry is a very accomplished guitar player--check out his extended solo on the tour-de-force “Heaven Lost An Angel.” As I said, the homemade nature of the guitars gives them a unique sound quality, Kyle Perry’s bass fairly rumbles and roars throughout the disc. Young Taya is not afraid to smack her snare or cymbals.

I am disappointed that I initially ignored these kids and their music. This musical family of youngsters and their dad are quite the group and they make beautiful music together!
Posted by Crossroads Blues Society at 7:41 AM