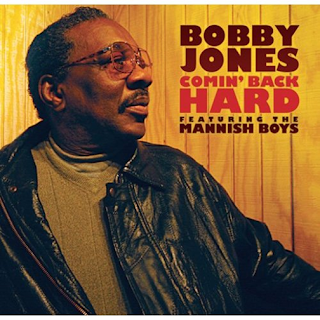 Delta Groove has resurrected the careers of a number of blues singers like Johnny Dyer and Finis Tasby as front men for the Mannish Boys aggregation. A fortunate encounter at a 2007 recording session led to label head Randy Chortkoff inviting veteran Bobby Jones to join the band on the spot. Born in Louisiana, Jones spent time in Chicago during the early ‘60s, enjoying steady work in the clubs but never getting the chance to record until he was part of the Chicago Blues Union project, which featured Mike Bloomfield and Barry Goldberg. Jones eventually drifted away from the scene and it was several decades before he reappeared, self-releasing some material that emphasized the soulful side of his singing.

Jones gets superb support from the excellent roster of musicians associated with the Mannish Boys. When you have the likes of Kirk “Eli” Fletcher, Franck Goldwasser, Kid Ramos and Junior Watson on guitar and a rhythm section of Fred Kaplan on piano & Hammond organ, Tom Leavey or Ronnie James Weber on bass and Richard “Big Foot” Innes on drums, you know the musical accompaniment will be in the pocket and will expertly frame the vocals of any singer they are backing.

Jones makes the most of his opportunity in the spotlight. Check out his version of “Tired of Your Jive”, a song that B.B. King popularized. Over Kaplan’s organ, Jones turns in a powerful vocal that leaves no doubt that his voice has not fallen victim to the ravages of time. “Come in Out of the Rain”, written by Leavey, is done in the classic Jimmy Reed style. Jones rides the loping rhythm, his mellow voice capturing the essence of the laidback groove. Chortkoff supplies the requisite upper register harmonica licks. The pace slows down on “I Don’t Know” and “I Must be Crazy”, with Jones utilizing his impressive range on performances that recall the style of the late Jimmy Witherspoon.

The warhorse “Mystery Train” gets an energetic run-through with Tasby and Jones sharing the lead vocal over strong contributions from Ramos and Chortkoff. The set features two tracks from the pen of Ike Turner. “Get It Over Baby” is a brief slice of jump blues with David Woodford laying down a nice sax solo before a taut Watson guitar solo. The disc closes with perhaps the most impressive piece of work from Jones. He begs, pleads and shouts his way through “How Long Will It Last”, his voice strong and clear without a hint of strain.

Over the years, many veteran blues performers have been “rediscovered” but all too often, their new work reveals that time has robbed them of much of their ability. That is not the case with Bobby Jones. After listening to this recording, you may be wondering how such a talented vocalist could fly under the radar for so long. Jones must have been a commanding performer back in the day and we are fortunate that his marvelous voice has finally captured in all of it’s glory.
Posted by Crossroads Blues Society at 7:58 AM