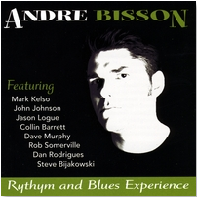 One of the cool things about being in a blues society is getting non mass-market CDs to review. Many of these CDs are where the hopes and dreams of new and un-heard artists are pinned. However, the gamut of these CDs runs from great to pitiful. The Andre Bisson CD I have in front of me, I would put somewhere near the high middle. I’ll explain my “issues” in a minute. First off, Bisson, a Canadian with boy-next-door-looks has thrown his hat into a pretty big ring: R&B singer. Thanks to the popularity of a certain reality show for wannabe singers, the ring is REALLY big. Where once the guitar gods ruled, now everyone wants to be a singer. When a singer, unadorned with a guitar (or other instrument) steps up to the mic, he or she is saying this is my instrument. The competition, if I can use that term, is might stiff these days.

I think Andre‘s instrument is OK. I don‘t think it’s great nor do I think it‘s terrible. I just think it will get better in time. Compared to his obvious influences, Joe Cocker, Ray Charles, and the blonde kid in The Commitments, I think he‘s currently lacking the breadth, depth, and nuances of the aforementioned. Bisson‘s range is limited., and there’s more gravel than sand in his delivery. Most of the CD is horn-band driven numbers in the Blues brothers/Commitments vein, but on the slow ballad, “Second Chance” there’s no sweetness in his voice: it’s the same gravel as the rest of the tunes. Because Bisson’s delivery is so similar, the songs seem to blend together. None really stick out. On the CD itself, there is quite a bit of gap between songs. I didn’t check the length, but at 10 songs I’m guessing a bit over 40 minutes of music. On the plus side, Bisson arranged all and wrote all but one song on the CD; and they show a lot of promise from a young (20-something?) artist. His session band adds everything a singer could want: tight, funky and on the money. From the “Hey Bartender”-like “One More Gig,“ to the swinging “Four Shots” to the cover of homeboy Neil Young’s “Heart of Gold,” (nice version by the way).

This CD, with a more seasoned singer, would jump right out at you. I must confess that I do watch American Idol very passively, AND I have heard A LOT of R&B singers in my day. With more range, control and nuance I think we will be hearing more from Andre Bisson. I know this sounds like a luke-warm review and maybe it is. Bisson has talent, but like I said, there’s a lot of competition out there. I wanted to be knocked out, and maybe next time I will be.
Posted by Crossroads Blues Society at 7:43 AM