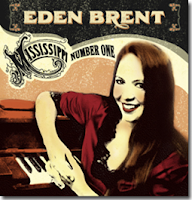 Eden Brent is a sassy, red-headed, piano playin’ Mississippian, and I found her first outing to be a joy. She has the “come hither” of Maria Muldaur, with a Dina Washington voice, and the piano chops of Diana Krall. Some albums are best late at night and some are afternoon albums. Brent’s is a combination: there’s late night small club here as well as music for an afternoon for mint juleps with friends. As you may guess from the title, there’s a lot of references to Mississippi and the original “blues” highway--number 1. This is also a tribute to Eden’s mother, Carole, who passed away in 2006, and who composed three of the fifteen songs here. Also included Amos Milburns’ “Trouble in Mind,” Joe McCoy’s “Why Don’t You Do Right,” Gershwin’s “The Man I Love,“ and several others not Brent penned. Don’t get the idea that Eden is not a good song writer; nothing could be further from the truth. She’s a clever and crafted songsmith. The songs she covers sound like her own and her ability to move from old-timey, to jazzy, to rockin’, to gospel, to bluesy numbers show the depth of her musical background. (Read the liner notes about her talented family and tutelage under Abie “Boogaloo” Ames.) Brent tackles themes of lost love, new love, lost jobs, sexual desire, life in the Mississippi delta region, and even the joy of fried chicken on this very “southern” sounding CD. The fifteen songs change stylistically from song to song, holding interest and, as I said, showing Brent’s songwriting and playing skills.

Is Brent a virtuoso? Maybe not, but there is a lot here to be enjoyed. This CD holds up well to the close listener and the backgrounder. She’s a talented lady, with a keen insight into the Greenville area and relationships. She comes to a genre overloaded with screaming guitars and dumb lyrics, contributing a refreshing breather from the same old-same old. I look forward to her next.
Posted by Crossroads Blues Society at 11:56 PM