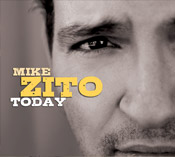 Mike Zito has the tatts, the Strat, and the pained look of an up-and- coming blues star. Although Zito sports “Blues” tattooed on his right hand, there is NO (in my opinion) blues music on this disc. That’s not to say this isn’t a noteworthy freshman outing. It’s just that Zito owes more to the ongoing series of Strat-toting pop songwriters than to Strat-toting Stevie Ray wannabes. Maybe that’s a good thing. Though not blues, the CD sports some interesting material, restrained and tasty solos, and a crack band featuring “Hutch” Hutchinson (bass), Bentmont Tench (keys), and Tony Braunagel (drums) who hold down some pretty solid grooves. Except for “Little Red Corvette,” (yeah, Prince), Zito wrote everything in the CD. His themes run from love (woman, first born son), the sins that await in the city, to the closer, “Time To Go Home,” about the end of a tour and the peace that awaits at home. So, not being a blues album and not really being a pop album, what is this thing? I guess it’s one of those efforts that will have to stand or fall on it’s own genre-less existence. So let the experts at Borders figure out where to place it, I say.

How’s the music, you ask? Zito’s slightly gravelly John Mellencampesque voice might be an acquired taste, and his guitar owes a lot to previous Strat players, but there is something likeable and identifiable about Mike Zito’s songs. He avoids the blues themed my-baby-left-me all-alone clichés for tunes like “Dirty Things” about a woman who so evil, we can only guess at the “dirty things” she does. “Hollywood” is about the vagaries of living in one of the most magical and at the same time sinister cities in America. (Side note: according to the blurb that came with the CD, Zito has a cameo in Spring Break ‘83--blues fans?!?!). “Universe” is a bland-lyriced tribute to Jimi Hendrix, that could also exist beside a Black Crowes CD. Zito‘s lyrics are heartfelt, the band is hot, Zito does a great solo on “Slow It Down,” BUT there is something missing here. I can‘t really put my finger on it. It may simply be the way Zito’s story is sold (a recoveror who made it); the crack band (did he need them the sell some just OK tunes?) or maybe it’s just that he covers “Little Red Corvette”.

Blues fans, move on. Rock fans give a listen.
Posted by Crossroads Blues Society at 11:58 PM