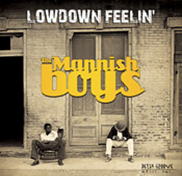 With 17 songs and 20 musicians, the new Mannish Boys CD is sorta like Jazzfest: if you can’t find something to like, then you don’t like music. The fourth CD from The Mannish Boys is another very enjoyable disc featuring the key players, Kid Ramos, Eli Fletcher, Finis Tasby, Johnny Dyer, Randy Chortoff, Richard Innes, Ronny James Weber, Bobby Jones, Frank Goldwasser, and Tom Leavey. Special “guests” include Junior Watson, Lynwood Slim, Al Blake, Fred Kaplan, Little Sammy Davis, and Fred Scriber. With tons of talent and an ear toward the “less-heard” side of blues songs selection, The Mannish Boys have another “hit” by continuing on a path begun with 2004’s That Represent Man.

The CD kicks of with a guitar/trumpet, near-mariachi intro to “These Kind Of Blues.” But it’s not the Butterfield version most of us are used to: Bobby Jones and band own this one in their own right. Randy Chortoff contributes two songs. The boys cover only two more pretty-well-knowns: “The Same Thing,” and “You Don‘t Love Me.” (I question the wisdom of doing the latter as an instrumental with ALL the vocal talent available here.) Also included are Wolf’s “Chocolate Drop,” two Little Sammy Davis tunes, and two-hands full of lesser known gems like “Figure head,” “Something’s Wrong,” and “Dead Letter Blues.” I won’t take the time to mention or review each cut--17, remember?

It’s hard to pick a favorite cut with a CD this long and with so many great players. For those of you unfamiliar with The Mannish Boys, part of their “shtick” is to stay pretty close to older blues confines--read no songs made unbearable long by 15 minutes of guitar soloing. These guys, for the most part, have other things to do, so their acknowledgement of and adherence to the “old school” is a choice not a gimmick. SO . . .given all that, my favorite cuts are “These Kind Of Blues,“ Searchin’ Blues,“ The Woodchuck” for it’s unique hilarity, “”Figure Head,” “Rude Groove,” and “Something’s Wrong”. Does The Mannish Boys near perfect copping of 50s/60s Chicago blues, you ask, automatically relegate them to incidental background music? Not in the least I say. They satisfy at all levels and give us something that has been missing quite a bit lately--old school (great singers, guitars, harmonicas, piano, bass, drums, occasional horns). Which, to me, is good school.
Posted by Crossroads Blues Society at 11:59 PM