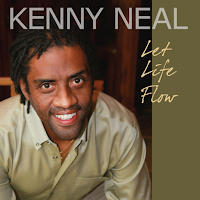 After a move to the Bay Area and a recording hiatus, Kenny Neal is back with a new CD of music written and performed as Kenny wanted. After stints with Alligator and Telarc, Neal was excited to get the opportunity to create a more self-directed project and he has created an introspective CD of mixed original and covered songs.

Anyone who has met Kenny Neal knows that he is a genuinely wonderful person and an exceptional artist. In 2004 and 2005, he had four close friends and family members pass away. This new CD, Let Life Flow, is a part of the healing process that Kenny has been going through. Kenny dedicates the CD to his dad Rafus, brother Ronnie, sister Jackie, and past drummer Kennard Johnson. The track “Fly Away” was written for them. He laments on the temporary nature of our existence and sings that “we are only passing through;” yet despite the darkness, Neal also focuses on that “one day will come, we’ve got to fly away to a better place,” recognizing that our existence is just a precursor to something better.

Neal’s blues run hard and deep in this CD, yet the music is obviously a release for him. In the opening title song Neal philosophizes about letting life flow due to it’s unpredictable nature and the fact that we just can’t control what happens. In “Blues, Leave Me Alone” Neal demands that the blues please leave him alone and that ”you oughta go back to your troubling home.” In “You’ve Got to Hurt Before You Heal” Kenny tells us that “That’s the way love works” in losses; “you’ve got to hurt before you heal. After this trio of opening songs, one’s heart goes out to Kenny and what he’s been through.

Neal gets a little more upbeat in tunes like “Louisiana Stew,” “Starlight Diamond” and “Since I Met You Baby,” but the general tone and timber of the other eight tracks are emotions that are deep in the blues.

In the closing song “It Don’t Make Sense You Can’t Make Peace” Neal sings about all the things we can do in life to cure peoples ills, create technology and solve some problems and yet we can’t make peace. An apt commentary on the world we live in.

In his despair, humility and hope, Kenny is joined by a number of talented folks who add a lot to the CD. His son Kenny Jr. joins him on the majority f tracks with keys, electronic percussion, bass and horn work. Junior was a big part of this production and Kenny gives him credit in the liner notes as he does his does his Mother and the rest of his surviving family. Lucky Peterson appears on three tracks with some great keyboard work. Joe Campbell’s trumpet supports a half dozen tracks with great musicality. But it is Kenny who really brings home the bacon in this CD. His baritone vocals, guitar and harp work are superb.

I think of Kenny Neal as one of the young new generation of bluesmen due to his youthful look and attitude, yet he’s already reached over a half century of birthdays. I guess the youthful, swampy, bluesy artist is forever young in both his and our hearts.

If you are looking for an album of pure, uplifting music then this is not your CD. If you are looking for the display of a variety of emotions ranging from the darkest despair to the shimmer and glimmer of the Phoenix of hope rising from a man who is dealing with his losses and is now moving on, get this album. It is a fine piece of work by a talented man who I am happy to see touring and recording again!
Posted by Crossroads Blues Society at 12:02 AM