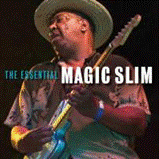 Magic Slim & the Teardrops have been one of my favorite blues bands for over 25 years. For me, they have always represented everything that I like best about modern electric blues music. Their live performances set a standard that few other bands could live up to as they would settle into a deep groove and stay there all night long.

This collection is taken from the six recordings Magic Slim has done for the Blind Pig label, with every track having been previously released. There is a variety of backing musicians throughout the disc with the primary backing coming from brother Nick Holt on bass, Michael Dotson on second guitar and Allen Kirk on drums. All three men contribute backing vocals.
One listen to this disc will quickly demonstrate that it really doesn't matter who the band is - Slim has his own distinct sound that varies little based on the band members. The driving rhythms and tough vocals that come straight from the West side of Chicago have changed little over the years. On one highlight, "Goin' to Mississippi," Slim starts with the declaration "I'm ain't drunk but I'm drinking," before the band settles into a pile-driving beat with Slim's guitar spitting out wicked licks at every turn.

Other highlights include the a stark emotional performance on "Crazy Woman," a slow blues that brother Nick composed that highlights Slim's deep, booming vocal and a rollicking take on the Jimmy Reed classic "Down in Virginia" that features a vocal duet with the two brothers. The longest cut on the disc is "Please Don't Dog Me," another slower paced song that features plenty of biting guitar from Slim that punctuates this tale of betrayal.

This set contains many prime examples of why this hardworking band is a favorite of blues fans around the world. If you don't have much of Magic Slim in your cd collection, make sure you get a copy of this one. Better yet, buy it and then catch Slim & the Teardrops live while you still can.
Posted by Crossroads Blues Society at 11:08 PM