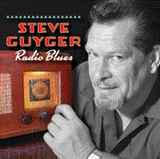 Radio Blues
Steve Guyger
Severn Records
http://www.severnrecords.com/
14 tracks/53:05
Anyone who was at the Dennis Gruenling Tribute to Little Walter show at Big Cities last month got to experience Steve Guyger up close and personal. His tasty harp playing captured that old school sound of the best Chicago blues bands. But the real revelation were his outstanding vocals. Guyger has a deep, gritty tone that can convey every emotion from heartbreak to the ecstasy of love. His latest release serves up further proof that he is a masterful blues performer.

Guyger gets excellent support from a topnotch band that includes Johnny Moeller on guitar, Steve Gomes on bass, Robb Stupka on drums and Bill Heid on keyboards. These veterans bring plenty of life to the ten Guyger original tunes and the four covers selected for this release. Some of the performances sound so authentic that you will be checking the credits, convinced that the song is some little-known blues gem rescued from obscurity and not a recent Guyger composition. "Blues Won't Let Me Be" is one example of how deep into the tradition this band can get. Guyger wails away on the chromatic harp when he isn't belting out the tale of pain and misery. Equally fine is rhumba tinged beat on "School is Over," which finds Guyger caressing the lyrics with an appropriately subdued vocal. Then he lets out several loud, long blasts on his harp as if to signal just who is in charge.

"Afghan Rumble" is a harp instrumental dedicated to Steve's brother, who did a tour of duty in that Middle East country. Stupka lays down a jaunty beat while Guyger lets loose some train-like harp phrases before he blows tight phrases that dance around the rhythm. The opening track, "Lookie Here," is another song with that tough, classic sound that will never go out of style. It's followed by a track that could be Guyger's own personal tribute to Little Walter, "You're So Fine." Once again, the band cooks away with Moeller getting the chance to show his skill on guitar.

The Rudy Toombs song, " I'M Shakin'," receives an ominous-sounding vocal from Guyger that equals the Blasters version of this classic. Guyger captures the spirit of all of the fine swamp blues on the Excello label on "I Can See By Your Eyes," with Heid on organ to flesh out the arrangement. "Hey Little Baby" employs a hand-jive groove by Stupka, which is the only accompaniment Guyger needs to fashion another impressive mix of his quality singing and fine harp work. When the band finally tackles one of those lesser-known tracks from the pen of Muddy Waters, Guyger goes deep into the lyrics, his voice bending and breaking as he pleads for attention from the object of his affections. That the rest of the disc sounds as tight and in the pocket as this track is proof of the high standards Guyger was able to achieve.

Harmonica fans will be listening to this disc many times over. Guyger definitely has the tone, technique and skill that make him an equal to most of the best harp players you can think of. But if you listen closely, you will also discover Guyger is an awesome blues vocalist, singing with power and conviction throughout this recording. He may not be as well-known as some of his contemporaries. But after you spend some time with Radio Blues, you will be telling your friends and family about the talented Mr. Guyger. This one is highly recommended !!!
Posted by Crossroads Blues Society at 11:06 PM