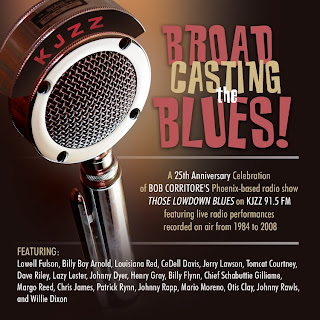 This release celebrates the 25th anniversary of the Those Lowdown Blues program heard every Sunday evening on radio station KJZZ in Phoenix. Bob Corridor, who could be considered a Blues renaissance man, hosts this award-winning program. Bob is renowned blues harmonica player, a record producer, live concert promoter and the owner of the Rhythm Room, the premier Blues club in the Phoenix area.

For this disc, Corritore gathered together some of the best tracks cut live in the radio station’s studio during on-air broadcasts over the last two decades. The line-up features better known performers like Billy Boy Arnold and Louisiana Red along with musicians who deserve more attention like Tomcat Courtney. Most of the tracks feature striped-down arrangements – mostly a guitar or two while others feature the harmonica. The sound quality is consistently strong throughout, with a sense of immediacy in the performances that is the hallmark of a live session.

Lowell Fulson leads things off with “Sinner’s Prayer” - just Lowell’s strong vocal accompanied by his guitar. Courtney displays his mastery of the deep blues feeling on “Tell Where You Stayed Last Night” with Chris James helping out on guitar. The duo continues their magic on “The World is Mad” with another energetic vocal from Courtney. Arnold dedicates “Shake Your Boogie” to John Lee Williamson, the original Sonny Boy, punctuating his vocal with some masterful harp playing.

Louisiana Red appears on three tracks, getting help from Chris James on “The World is Awful”, the two guitars establishing a driving rhythm. Red goes solo on two gospel tunes – laying down some mesmerizing slide guitar on “Home in the Rock” and shoutin’ down the rafters on “Look What a Wonder”. The pairing of Otis Clay and Johnny Rawls delivers a take of “I Want to be at the Meeting” that impresses with its subdued intensity.

Other highlights include Chief Schabuttie Gillame’s strong vocal on a driving take of “No More Doggin’”, Billy Flynn using the instrumental “Billy’s Bounce” to display his prodigious talent on the harp and Johnny Dyer capturing the classic Chicago style on “Johnny’s Crazy Blues” with help from James on guitar and Patrick Rynn on bass. Margo Reed may not be a household name but you will certainly remember her heartfelt acappella rendition of “Eye on the Sparrow” that closes the disc.

Corritore has put together a wonderful collection that serves as a tribute to his radio program as well as the various musicians who have joined him on the air over the years. Every performer digs deep into the well of emotion, each generating that extra spark that is unique to the live setting. After you hear this release, you just might consider moving out west. Congratulations to Bob and KJZZ radio – best wishes for another 25 years of great blues !!!
Posted by Crossroads Blues Society at 6:52 PM

What a fabulous broadcast. What amazing music. This is the sound of blues at its finest. I love music. And the blues sound is incredible. The blues industry needs more new talents training to be a part of the blues world. This is an exciting time - 6 months to become a part of the music world would be a dream. RC places you under a mentor to get trained on real music gigs. http://www.recordingconnection.com