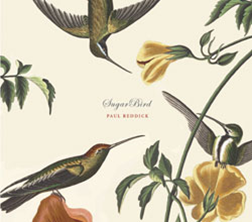 Who is Paul Reddick, and why is he making such great music? Paul is devoted to early American music. He learned by listening to the blues masters: Muddy Waters, Sonny Boy Williamson, and Howlin’ Wolf. He is a master of the harmonica. He absorbed early country and jazz; he is a musical cornucopia. In 1990, he formed the groundbreaking blues band The Sidemen in Toronto releasing three albums of original material. He spent 10 years on the road sharing his music with live audiences. He has been nominated for W.C. Handy Awards and Juno Awards. The band also won three Maple Blues Awards in 2002, including Songwriter of the Year and Album of the Year. His music has been used in television shows, movies, and his song “I’m a Criminal” was used in a Coca Cola commercial.

Who are the players that make this CD so good? Garth Hudson of the Band provides the accordion. Hutch Hutchinson from LA is one of the bass players. Nashville drummer Bryan Owings is there along with Cary Craig on drums and John Dymond on bass. Chris Carmichael and Darrell Leonard help to arrange and are heard on strings and trumpet. Colin Linden, who is the leader of the Emmylou Harris band, is on guitar and he produced the CD. Colin is an acclaimed producer/blues musician in his own right.

The songs on this CD are blues based but not necessarily blues structured. The music textured and layered. There are so many nuances adding to the beauty of this composition of songs. You have to listen, and you will hear. It’s all here, from blues folk, to gut bucket, big band, cabaret and jazz.

Let’s take look at the songs. The CD opens with “Morning Bell,” an uptempo tune reminiscent of Mississippi John Hurt. Next up is I “Will Vanish,” a haunting song with phased vocals, featuring a studio mix of layered instruments. “Devilment” is a down in the basement, gut bucket, edgy song. “Blue Wings” is a sparse composition about the sugar bird, again the layered sound tastefully done. “John Lennon in New Orleans” recalls 1959 hit “Sleepwalk” by Santo and Johnny. “It’s Later Than You Think” is a big band romp from the style of Louis Jordan or Cab Calloway. “Breathless Girls” is another simple effort, with some excellent horn and string arrangements. “Wishing Song” is Paul, Colin and Garth providing another simple composition featuring Garth’s accordion and Colin’s 12-string guitar along with Paul’s vocals. “Every Temptation” rings of the Stones country sound only a bit smoother. “Climbing Up The Hill” is a thoughtful song presented in a simple form, once again featuring Garth Hudson’s sweet accordion. “If By Then” is another haunting gem of studio mix and layered sounds. The CD closes out with “Block of Wood,” a down in the bottom blues stomp.

I highly recommend this CD. It is not blues in the strict sense of structure and sound; it is blues based. It is a musical journey that is a melding of different sounds and styles, tastefully done as only Paul Reddick could do.
Posted by Crossroads Blues Society at 6:47 PM