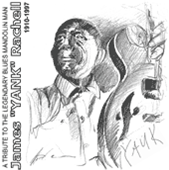 The mandolin has experienced a resurgence in recent years as a number of blues musicians like Rich DelGrosso, Gerry Hundt and Billy Flynn have featured the instrument on their recordings. Yank Rachell was the first to popularize the mandolin in the jug band and blues settings. He played several other instruments and was a fine singer as well as a adept songwriter. The disc features fifteen of his tunes including classics like "She Caught the Katy" and "Divin' Duck". But his deft maneuvering on the mandolin's smaller fret board will be his legacy in the history of blues music.

Producer Mike Butler has assembled a strong cast of musicians to honor Yank, including his granddaughter Sheena, who played bass for Rachell for many years. One of the highlights of the disc is her moving vocal performance backed by Butler's electric slide mandolin on "Lake Michigan Blues". She has since been diagnosed with a rare lung disease. The net proceeds from the sale of the cd will help pay for her medical care.

Karen Irwin takes on "She Caught the Katy" backed by a full band that lacks a mandolin but features Craig Peterson on tenor sax. She alternates between a sultry and spunky tone that rides the driving beat with style. Another highlight features two masters, John Sebastian on guitar and Dave Grisman on mandolin, having fun with "Tappin' That Thing" in front of a live audience. There is also a track of Sebastian telling the audience some humorous Rachell stories. Andra Faye, a member of Saffire- the Uppity Blues Women, dazzles with "My Baby's Gone" complete with her soaring vocal and delicate mandolin picking. DelGrosso's deep, booming voice contrasts his rapid runs up and down the mandolin neck with superb backing from Ernis Scarbrough on organ.

A couple of the finest bluegrass musicians make appearance, starting with Tim O'Brien on the opening track, "Texas Tony". O'Brien is a talented multi-instrumentalist and vocalist, which he proves once again in this spirited romp. He is accompanied by David Grier, one of the top flat picking acoustic guitarists in the world. The traditional tune, "Sitting On Top Of the World", finds Peter Rowan working his magic with his pleading voice capturing the irony in the song's lyrics.

Through the magic of the recording studio, Orville Johnson becomes a one-man band, playing all the instruments including some fine mandolin work. His expressive singing adds to the magic on another Rachell tune that sports one of the great titles of all time, "Let Me Tangle in Your Potato Vines". The energy level goes way up on "Seems Like a Dream" with Bert Dievert on vocals and mandolin backed by a full band.

The only track that failed to impress was "Cigarette Blues" another multi-track effort by Jean-Louis MahJun that sports an aggressive electric guitar that seems out of place with the rest of the tracks. The disc closes with an acapella vocal snippet of "Freedom", Rachell's favorite gospel hymn, performed by his two daughters and his granddaughter.

Butler has brought together a varied cast of musicians of varying degrees of fame to celebrate the legacy of Yank Rachell and he has succeeded admirably. The quality and variety of the performances will provide plenty of listening pleasure even after repeated plays.
Posted by Crossroads Blues Society at 6:48 PM