The Rebound reviewed by Rick Davis 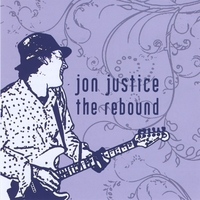 Born in Chicago in 1982, Jon Justice began his music career touring nationally with Gospel and Blues groups. In 1999, he moved to Memphis joining with veteran pianist Steven Bowens (Percy Sledge, Exile), to form the group The Recipe. Together, they toured from 2000 to 2003. As he developed his own sound and gained experience on the road, he teamed up with producer Phillip Wolfe (producer of artists like Alabama, Trick Pony, Dickie Betts, and Wayne Jackson of the Memphis Horns) to produce his first studio release Forget About Time in 2004.

In January of 2008, Jon Justice once again went into the studio to record his second release The Rebound. This time, Justice wanted to have more input, so he wrote, arranged and co-produced all 14 tracks. The Rebound is a masterful release of the soulful ballads that typifies the road-tested group, showcasing Jon's slide guitar and well developed blues voice similar to that of an early Johnny Lang.

The Rebound begins with "Nobody's Bizness" showcasing Jon's well developed voice and slide guitar and features Phillip Wolfe on harmonica. Justice rips into "Bad Bad Man" featuring an accomplished horn section lead by Wade Baker on trumpet and Ben Walkenhauer on sax. The next high powered cut reminds us we all live in a "Mean Old World". Justice then slows things down with the soulful ballad "All in My Head". The title song "The Rebound" again features Jon and his searing slide guitar with background harmonica provided by Phillip Wolfe. He tells of the reality of life's ups and downs with "Blame". "Leavin' to Stay" showcases Jon's ability to play slide guitar as well as any blues artist in the business today. Together with Ben Walkenhauer's solo on saxophone and Jon's vocals on "You and Me" they bring a jazz element to this ballad. The band's horn section and Jon's "Joe Cocker" vocals provide a great rhythm and blues sound to "Lose It All". "Working Girl" paints a vignette of life on the streets. Justice tells us there is no easy way to leave in "No Good Goodbyes".
Straight ahead blues number "You're Mine" once again displays Jon's accomplishments as a contemporary blues artist highlighting this time his great backup vocals on the cd.
"Get You Good" blends the nostalgic sound of a typical 60's ballad and the solid blues that is typical of Justice and his contemporary blues band.

He ends with "Brighter Day" delivering the best in soulful blues!
His performing and song writing ability displayed in The Rebound should bring us the best in blues entertainment for years to come.
Posted by Crossroads Blues Society at 6:39 PM