A Night in Woodstock reviewed by Mark Thompson 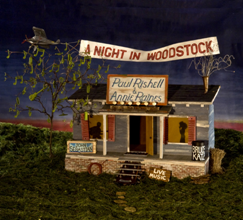 The duo of Rishell & Raines has been working hard to keep the acoustic blues tradition alive for the past fifteen years. Paul is outstanding guitar player, equally proficient on acoustic or electric models. Raines has mastered the country blues harmonica style popularized by Sonny Terry. Together they are a formidable musical force. When you add the likes of John Sebastian (Lovin’ Spoonful) on harmonica and the keyboard wizardry of Bruce Katz, you can be sure that there will be plenty of musical highlights.

This project was an offshoot of a documentary film on jug band music. The film’s director, Todd Kwait, wanted some footage of Sebastian playing with Paul and Annie. They had a show already scheduled in Woodstock and it quickly grew from a bar gig to a full-scale production that included the members of their regular band – Reed Butler on bass, Billy MacGillivray on drums and Chris Rival on electric guitar.

Blind Boy Fuller’s “Custard Pie” is the opening track, quickly establishing the strengths of the Rishell/Raines pairing. Paul picks a sprightly tempo on his National steel guitar to accompany his strong singing as Annie’s harp echoes his vocal lines. Rishell demonstrates the impressive range of his singing voice on “Canned Heat Blues”, only to top it on the next track, a chilling version of Johnny Winter’s “Dallas”. His deft slide guitar work gives Raines the foundation for an inventive harp solo. Raines takes the lead on their original tune, “Got to Fly”, singing with plenty of energy. The audience is captivated by her ability to draw a variety of tones and inventive phrases from her harp when she cuts loose.

Katz joins the show on another original, “Blues on a Holiday”, his contributions filling out the arrangement and adding an extra touch of melancholy to the tune. Raines switches to the chromatic harp, capturing the forlorn nature in the song’s lyrics. “Can’t Use it No More” features the entire band backing Rishell’s powerful vocal and Sebastian makes his first appearance on harp. The band kicks it up a notch “Moving to the Country”. The twin guitars of Rival and Rishell drive the arrangement as Rishell shouts out a commanding vocal. They also settle into a deep groove on “Blue Shadows”, with Katz getting plenty of solo space before Rishell injects some B.B. King-style guitar licks.

This recording really grows and evolves from start to finish. Rishell and Raines make the transition from duo to full band without missing a beat. Their performances prove that they have mastered the acoustic tradition and can hold their own with a full band. The variety of styles and the musical skill of Rishell & Raines make this impressive project a must-hear recording for all Blues fans !!!!
Posted by Crossroads Blues Society at 6:50 PM