All Wound Up reviewed by Steve Jones 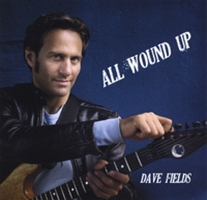 Dave Fields new album is filled with mostly upbeat, uptempo original songs and hot driving guitar playing. This Big Apple musician was born and raised in NYC and then attended Boston's Berklee School of Music. After school, he reestablished himself in his hometown and opened a studio. He produced, wrote, performed and became involved in a host of musical activities. His father, Sammy "Forever" Fields, played virtuoso piano and wrote, arranged, and produced music ranging in style from jazz to the Capris' "There's a Moon Out Tonight", so there is some great musical DNA flowing in Dave's work.

The opening song "Key to My Heart" begins with some fuzzed up wicked guitar licks and drums that begins the journey though a dozen original tunes. "I'm Still Itching" also features a totally fuzzed out guitar to open the song, this time trading licks with an equally distorted harp. Fields can really get your attention in the first few opening measures of a song!

The title track "All Wound Up" is a George Martin White Album-like production number with a driving beat fueled by horns and showcases Fields on piano and organ solos. He later pulls off a swinging jump tune called "Bill Fat Ludus" and then goes into a rocking instrumental called "Screamin'". I felt like getting out of my chair and dancing in the living room as I listened to these two songs.

Fields completely shifts gears after that the with a bluesy ballad where he just Wanna Be Your Man", and goes on with some more low keyed stuff for the last three tracks of the CD. The subdued Fields is equally musically adept. He gets you with his driving beat and then completely captures you with his soulfulness.

Dave's vocals remind me a lot of the smooth-toned Noah Hunt, who fronts the Kenney Wayne Shepherd's band. Dave's website notes that his vocals have a "boy next store" quality to them, and I would have to agree. He plays guitar, piano, and organ and fills in on bass and drums occasionally, too. Billy Gibson's harp work, the horns by Rob Chaseman and Bill Fergus' trumpet are outstanding additions to the music.

This is Dave's third CD, released last year. It is available on CD baby along with his second CD (which was released in 2007). If you want to hear a rocking bluesman who is an ultimate professional that can also win you over with his shuffling laid back stuff, go get this CD. I did and I am glad I did!
Posted by Crossroads Blues Society at 6:40 PM