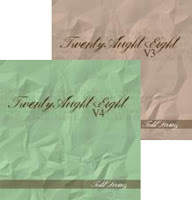 52 songs in 52 weeks is a Herculean effort, and Todd Lorenz proved that he was up to the task. I’ve listened to all four volumes now (I reviewed V1 and V2 in our November-December 2008 Crossroads Blues Society Newsletter) and I can honestly say that this was a true labor of love. Are there 13 songs on each CD that I would go crazy over and recommend from start to finish? No, but there are many good ones and all of them are marked with the proud imprint of this kindly big man.

His voice is also quite unique. In the lower registers he growls and evokes some darkness with the deep natural timbers of his voice. There are some issues in the higher registers, and that sing-song nature I noted in the first two CDs really comes when he’s well above the middle half of his range. I think he tries too hard to “sell” the songs vocally as roots music, and this results in the nasal sing song effect. He’s got the range, he’s got power, but he needs to work to get the nuances and tonality on the higher end. But those criticisms are small compared to what he’s delivered overall.

V3 kicks off with a secular tune that sounds like an old time Gospel hymn; it’s called “Bring Me Relief”. Todd “prays” to his physician for relief. He’s looking for peace and relief again in a couple of tracks in the bluesy “Find Peace”. One of my favorites is the instrumental “Running”. It sounds like music from India or the Middle East, with his slide doing some overtime work. “Quiet Country Living” is the other instrumental on V3, and Todd electrifies his slide along with providing nature sounds from his rural backyard. Quite cool. “I Could Be Wrong” is Lorenz’ version of a protest song focusing on conspiracies in our Nation and his spoken and sung parts remind us of the times 4 decades ago. The CD ends with a track called “Faith”, where Todd talks about things he has faith in, an apt ending for the volume.

V4 starts off on a different vein. He says he’ll "Take your woman and I'll make her mine; I'll loveher more in one night than you could in your whole life." Big Bad Man” is Todd’s version of badass blues. “Day and Night” is the only all electric, totally non-acoustic cut on all four discs and is an instrumental to boot. Lorenz wails and grinds away in slow slide guitar blues using his newest guitar and he uses it well. “The Woman I Love” describes a failed relationship, one many of us can identify with; his slide punctuates this one nicely. The other instrumental is “Truckin’”, not the Grateful Dead sort of trucking, but some down home acoustic blues mixed with a rocking beat.

It’s worth checking these CD’s out. You can sample them on the web. Todd is a very good musician who worked to find himself with all these songs last year and he has done a darn good job!
Posted by Crossroads Blues Society at 10:51 AM