Nudge It Up A Notch reviewed by David Stine 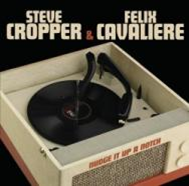 I was given this CD to review by a CBS board member (it didn’t come in on the usual flight pattern of new blues releases). I jumped at the chance, however, being an old enough codger to have been alive when Booker T. and the MGs and The Rascals were playing and putting out albums. Steve Cropper has laid down some of the most snaky and sinuous guitar licks this side of Memphis, and Felix Cavaliere was the voice and soul of The Rascals. So my expectations were pretty high. At this writing, I just finished my fourth listen to the disc--this time on a good system. What’s the outcome? Well, imagine going to a Jefferson Airplane reunion but hearing Jefferson Starship doing a bunch of gooey Marty Balin love ballads. My first impression (and second) was that this is mostly a Felix Cavaliere album that Steve Cropper guested on while doing another project that he REALLY cared about. And, yeah, it sounds more like “How Can I Be Sure,” than “People Got To Be Free.” Additional help comes from Shake Anderson on bass; Chester Thompson on drums; and Mark Williams and N’andI Bryant on background vocals. But does a stripped down ensemble equate into the Rascals/MGs? Cavaliere uses WAY less B3, and Cropper WAY less Telecaster sting, so the focus automatically is on the vocals (and lyrics).I DO, at times, hear Marty Balin and other times hear Steely Dan. These aren’t bad things, I was just hoping for more soul, funk, and, well, MAGIC. Cropper/Cavaleiere add three instrumentals that never seem to catch fire. Nope: no “Hang ‘Em High” or “Green Onions” here. On the plus side, Cavaliere’s voice has never been better. Too bad most of the songs never really break out of a moderate tempo. “Make The Time Go Faster,” is a quasi rap tune and the only one that sounds “topical.” The rest could have been culled from stuff that’s been lying around for awhile. Cavaliere’s keyboarding, perhaps purposely, stays away from the Hammond B3 sound while Cropper remains so typically understated that he’s almost “phoned in.” Cropper never seems to cut loose, even on the instrumentals. During listen four, I asked myself to give this disc a chance on its own merits--no Rascals or BT&MGs comparisons--and THEN evaluate it. There ARE aspects of the CD that seem to grow on me: some songs linger right on the edge of humable. There were NOT enough of them that I would encourage fans of The Rascals or Booker T and the MGs to run out and buy this disc. I told a friend of mine who owns a record store that I was reviewing the CD and he said, “it’s pretty good, isn’t it?” He said it was good to hear Cavalier’s voice again. That is true. Unfortunately, the songs are a bit uninspired and the lyrics clichéd. On a better system, the sound is a bit muddy. This is not a party album, but it does hold some value for the champagne-by-firelight venue. It is not a bad CD; it just never really grabbed me the way many Rascals songs did.

I don’t know why the album title, but I wish they HAD nudged it up a notch. I wanted to like it more than I did.
Posted by Crossroads Blues Society at 6:32 PM