my Hometown reviewed by Steve Jones 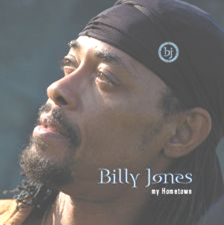 No one who I can think of, except perhaps James “Blood” Ulmer, has taken a truly contemporary look at traditional blues with the musical and lyrical intensity of Billy Jones. While Ulmer’s music is often dark and angry, Jones takes a more restrained and soulful approach while still expressing deep love, despair, and other intense feelings with his music.

Musically, there is a mix of styles on the CD. Jones can hammer out some hard, driving blues or go more traditional in his approach. But what really got to me were the lyrics. There are several songs where Billy gets into the urban problems of his "hometown."

The modern, urban blues lyrics start right from the beginning of the CD. He starts out with some slow jam/blues in a ballad called “Here With You”. He sings of how deep his love is: “your love is much warmer than my prison cell, so if the homies ride tonight I think I’m gonna stay right here”. With the second track, “Pull My 44”, Jones sings of a jealous lovers' rage. He describes his lovers' beauty and talks about how he’s jealous and if “I catch you messin’ wit’ my woman, Man I’m mo’ pull my 44”. The music has a Mississippi Delta component to it, yet it is modern and urban. Later, we hear “ Crystal ”; this is a semi-psychedelic rocking song about his addiction and the dangers of Crystal . It’s not a girlfriend named Crystal , but crystal methamphetamine. In the title track, “My Hometown’, Jones talks frankly about the problems in the ghetto. Schools not teaching you what to do, gangs, violence, meth labs, broken families, and a repressive system all become part of these modern blues.

Jones goes a more traditional R&B route with music and lyrics in cuts like “Right Now” and "Never Let You Go”. The deep bass notes driving the beat and his vocals are a throwback to an older soul era where he sings of loves won and lost. In “The Clown” Billy goes to his guitar and sweetly bends some notes to punctuate the song about his lost love, where he states “and girl for you I’m just a clown.”

Top to bottom, this is a nice little CD. Jones provides vocals and guitar, Ramon Goose is on keys and does the digital work, Joe Goose play bass and Gary Leach is on drums. Jones calls his music “Bluez” and sings about the problems of his life and hometown with heart and feeling; it is “blues” transformed, updated and urbanized. This North Little Rock Arkansas musician is the real deal and his 2007 release “my Hometown” is a great CD!
Posted by Crossroads Blues Society at 6:46 PM