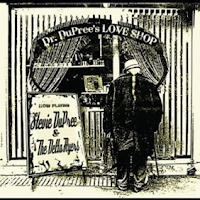 Betsie Brown and Blind Racoon have got to stop sending us stuff like this to review- I just want to listen to it over and over again!  It’s another great CD by lead singer Stevie and guitar player Travis Stephenson.  With Quentin “Q” Calva on bass and Steve Bundrick on drums, these guys blend blues and bluegrass with a little Cajun and country music into a wonderful set of tunes.  Marcia Ball plays piano on one track, Mark Kaz Kazanoff adds tenor sax, harp, harmonies and percussion, Nick Connelly is on keys, and the Texas Horn of Kaz on tenor, John Mills on baritone and Al Gomez on trumpet also add their spark to the set.  DuPree has a hand in the writing of each song here.

The album opens with the jumping cut “Broke Up.”  Derek O’Brien adds slide and it makes for a great sounding performance.  DuPree howls and the band cuts a groove and the guitars wail.  It’s a nice piece to set the stage for the rest of the album.  “First Dance” follows, a bit of a swing/jump tune with Ball on the piano.  The horns add their sound to the mix, too.  It’s nicely done with the keys being tickled so prettily and the horns blazing oh so well.  Up next is the title track.  Alice Stewart sings the lead with help from Lisa Tingle and Stevie.  Stephenson gets funky on the guitar and then Kaz blows a mean horn solo.  At this point I was completely sold and the next nine tracks did nothing to dispel the good feelings.

“St. Paul’s Bottoms” is a big up-tempo tune about the former Ledbetter Heights area of Shreveport.  Harp and guitar solos abound- well done!  They take it way down next with “Angel of Mercy” and DuPree wails how his Angel of Mercy from the red light district gets him through the night.  The boys then get into a groove with “Soulbilly Music” and how it’s uplifting power makes everything alright.  Then “Ain’t Gonna Be Your Dog” gets us up and dancing.  DuPree sings of his relationship reprieve and Stephenson wails on slide.

“It’s My Life” gives us DuPree’s take on life.  Despite being “pitched high and tight” he’s happy with his life as he and the band swing and pick through this song showing us that he finer things in life pale to having a decent ride with your radio playing loud and your baby by your side.  Connelly lays down a nice keyboard solo here, too.  DuPree then testifies on “The Witness Tree” in this scaled down piece with just him and the piano starting off.  The band comes in soulfully after a minute or so as Stevie pledges his lover with his girl “under the old witness tree.”   The tenor sax solo complements the vocals here with its’ own beautiful testimony.

“The Old Mule” pops and percolates with some nice harp work and a cool lyrics as DuPree delivers another great performance; he’s not gonna be some girl’s old mule.  “Lucky Seven” is a rockabilly track  where DuPree likens his lifes’ successes to rolling a lucky seven the hard way.  Stephenson sounds a little like Dickey Betts here on the guitars he layers in.  Connelly takes us to church on the organ as the final track opens, but then it transforms into a love song about a hot number who DuPree is ready to follow around the world.  The organ solo is huge and the band gets into a great groove.

This is a great album.  I loved it from start to finish and just enjoyed the heck out of it.  DuPree and Stephenson are masters at reaching out, grabbing you and keeping you listening.  This is their best effort yet and I highly recommend it!

The Delta Flyers started as acoustic duo, playing traditional Delta Blues and incorporating different blues styles into their repertoire. Joining the group later on were Stevie DuPree and songwriter/guitarist Travis Stephenson forming the current group. Their 2007 release On The Levee Road earned the group a trip to the 24th annual International Blues Challenge held in January of 2008 in Memphis to represent the Houston Blues Society. In 2008, the group wrapped up a successful tour of the Southeastern United States with a sold out show in Nashville, Tennessee and an opportunity to attend the 2nd Annual T.A.G. Bluesfest in Mentone, Alabama.

Stevie DuPree & The Delta Flyers will keep you on the edge of your seat from beginning to end with their new CD Dr. DuPree’s Love Shop. This is the fourth CD that the group has released. It is a CD loaded with guest artists like Alice Stewart and Lisa Tingle on lead vocals, Nick Connolly and Marcia Bell on keys,  Mark "Kaz" Kazanoff, John Mills, and Al Gomez of The Texas Horns, and Derek O'Brien on slide guitar. This is in addition to the core group comprised of Steve DuPree on vocals, Travis Stephenson on guitar, Quentin Calva on bass and Steve Bundrick on drums. This should give you an indication of the musical expertise assembled for the release of this new CD.

The album opens with guitar drivin' shuffle "Broke Up" with a hint of John Fogerty style guitar riffs looming throughout. This is also one of many tracks with superb slide guitar work.  Marcia Ball is brought onto the scene along with the fabulous horn section of the The Texas Horns and Stevie DuPree's gritty vocals for the New Orleans flavored "First Dance." After the explosive intro by The Texas Horns, Alice Stewart and Lisa Tingle along with DuPree deliver the soulful vocals on "Dr. DuPree’s Love Shop." Superlative harp solos from Kazanoff and fiery guitar licks engulf  the tune "St. Paul's Bottoms." They slow things down for the ballad "Angel Of Mercy," featuring the soulful guitar solos of Travis Stephenson and the harsh, rough, husky vocals that only DuPree can provide. The spicy soulbilly music label provides the foundation for the tune "Soulbilly Music," mixed with gospel background vocals. According to DuPree the ingredients are simple "you take a roadhouse boogie and a taste of New Orleans and stir in some Texas mojo and a cup of ju ju beans." "Ain’t Gonna Be Your Dog" delivers some of the hottest slide guitar by Stephenson on the entire album. The entire band lays down a steady groove on the juke joint classic "It's My Life." The slow ballad "The Witness Tree," offering brilliant sax solos, could be a page from the Neil Young songbook. His use of the old mule as a metaphor in the New Orleans  tune "That Ol' Mule" expresses DuPree's lighter side. "Lucky Seven" almost conveys an Allman Brothers Southern rock sound throughout the song. The concluding song "A Hard Act To Follow" opens with a Procol Harum style intro and then takes a dramatic about face with an explosive Texas Horns entrance, followed by a high energy finale.

This studio CD would indeed be a hard act to follow with it's all-star cast of award winning R&B, gospel, funk, Cajin, and blues collectively on one CD. You owe it to yourself to pick this one up to enjoy.