On My Mind/In My Heart reviewed by Steve Jones 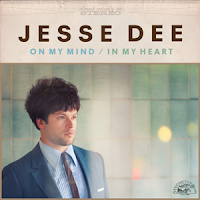 Okay, I must say right up front and to all to hear that when I saw this album and thought, “What the hell is Iglauer up to now? This kid is from New England and looks like he’s having a poofed up bad big hair day.  What are they thinking”  That’s what I get for judging a book by it’s cover.

I was headed out right after getting the CD to review, so I threw it in the car CD player for a listen.  I listened to it three time through and have listened to it a lot more since then.  My wife said to me in the car that day, “This really is a good CD.  Who is it?”  I answered simply, “Jesse Dee.”  “Wow, what a great singer!  He sounds a lot like Curtis Salgado.  I like this a lot!”  She’s right.  It’s a damn good CD and he does sound a little like Curtis.  This Iglauer guy is smart like a fox!

Dee sings and plays guitar.  Johnny Trama also fill sin on guitar on 5 cuts.  Jim  Larkin on bass and Matt “Pie” Beaulieu om drums offer up a solid backline.  Hammond and B3 are handled aptly by Eli Winderman and Steve Moss does the piano work.  Another half dozen guys fill in on horns and percussive stuff and others do backing vocals and appear here and there; it’s a big cast but they all play together and put on a superb show!  Dee wrote or co-wrote everything served up here.  It’s sort of like Curtis Salgado being back by Room Full of Blues gone wild.  I really enjoyed this one.

The CD opens to the title track, a jumping and swinging song with him hitting a Cab Calloway-like stride in the vocals.  The band swings and Dee floats vocally along with them.  It is impressive.  The horns and brass blare away, the drummer takes charge from time to time, but it is Dee who runs the show.  I was sold on the initial listen based on this song, and another ten that are equally good remained to be heard.

He can growl down low and hit the high notes; “No Matter Where I Am” follows with more great swinging sounds. “Fussin’ And Fightin’” blends a little reggae into the swing and Dee nails it.  His vocals are expressive and soulful again and again. “I Won’t Forget About You” is perhaps a little more Sam Cooke in style, with Dee swinging and jiving.  “Tell Me (Before It’s Too Late)” starts mellow and Dee builds into a passionate delivery, asking his woman what’s on her mind and to “Tell Me (Before It’s Too Late).”

Rachel Price joins Dee on the early 60’s sound of “From The Start;”  it could be a King/Geffen tune.  Price’s and Dee’s duet hearkens to that era and the band makes the feeling complete.  Dee hits some sweet high notes on “The Only Remedy” as he croons to his lover that, “your love is the only remedy.”  “What’s A Boy Like Me To Do?” continues in that vein.  The temp is taken way down but he is just so soulful and pure sounding.  He wants to leave but can’t; his confusion over his wanting to both love and leave is powerfully expressed.

“Sweet Tooth” has nice retro guitar and organ intro and Dee goes into a surf-swing mode.  Well done!  “Boundary Line” goes back down in tempo as Dee lays out a beautiful and soulful ballad for us.  He finishes with the swinging “Stay Strong,” a nice jump blues cut.  It’s just a powerfully great set of tunes top to bottom, delivered to perfection.

If you like to swing, if you like to hear someone sing with their heart and soul and if you like someone to totally bare their emotions in their music, then you will love this CD (as I did).  If you had to label him I’d have to say that Dee is a new generation of white R&B and soul singer.  Labels do not matter; this CD is a self-contained party.  You will want to dance and sing along more and more with each listen.  This is a fantastic effort (really his second CD, his first being a self released one in 2008) and he has a very bright future!  Jesse Dee is the real deal.  If you like Sam Cooke, Al Green, Curtis Salgado you’ll like this guy, too.  Bad hair day or not, let me repeat that Jesse Dee is the real deal.  Very highly recommended!