My World is Gone reviewed by Steve Jones 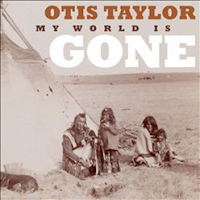 I remember 1987 when George Harrison released his third #1 hit, “Got My Mind Set On You,” the cover of the 1962 James Ray song written by Rudy Clark.  The music “press” commented that Harrison had finally recorded a song someone could dance to.  The critics made such a big deal about it and it irked me to no end; I loved the quiet Beatle’s music, it’s meaning and it’s spirituality.  Why did he need to produce music people in clubs could dance to when his music has so much meaning?

As my wife and I recently were listening to Otis Taylor’s thirteenth album release together, I thought back to those days in 1987 and said to her, “Gee, no one would ever say this music could be danced to.”  Otis Taylor and his trance blues style of music might be danceable to some people, but certainly not those who shake their proverbial money makers in front of blues festival and clubs stages.  However, it does not lessen what Taylor gives us.  His music is interesting, provocative, socially adroit and always topical.

Here on “My World Is Gone” he takes on the plight of the Native American.  Joined by his friend Mato Nanji from the band Indigenous, Taylor was floored by Nanji’s comment that, “My world is gone,” a reference to the Nakota Nations’ demise.  He produced this album in response to that comment and Nanji play s guitar on half a dozen tracks and also sings  bit here and there.

The album begins with the title track.  Taylor, Nanji, and Harris are joined by Larry Thompson on drums, Todd Edmunds on bass and Shawn Starski on guitar. The thoughtful song alternates the lead vocals between Taylor and Nanji, who bemuse the loss of the Nakota Nation. Nanji’s lead guitar adds punch to the mix and the occasional wail of Starski’s electric guitar echoes hauntingly.  Harris’ fiddle is a constant thread, beautifully running like a river throughout the cut.  Simple lyrics, the traditional repetitiveness of a Taylor song trying to make a point and they succeed.  Taylor, Nanji and Thompson take a more minimalistic approach on the second track as Taylor sings of the Navajo man who says he “Lost My Horse.”  Nanji’s lead guitar is driving and intense while Taylor adds mandolin and slide while Thompson beats out a furious groove. After two tracks I was pretty much emotionally spent.  Wow!

Taylor’s banjo and Ron Miles cornet are featured next on “Huckleberry Blues;” the banjo plucks out a distinctive line as the cornet (Ron Miles) flutters emotionally.  It is a really nice track.   “Sand Creek Massacre Mourning” tells a tale of the Navajo and Arapaho Indian massacre at the hands of Colonel John Chivington and his men on November 29, 1864.  Brian Juan’s organ is introduced here and with Miles’ cornet they provide a funeral-like sound in the background of Taylors’ singing and strumming on top of a military-like marching drum beat.  More powerful and emotional music is on display for us here.  A more traditional electric blues sound is next on “The Wind Comes In.”  Nanji’s lead is impressive and Taylors’ counterpoint on banjo is a striking contrast. “Blue Rain in Africa” tells the story of the sacred and mystical white buffalo as seen on television in the story tellers’ youth.  Nanji, Taylor, and Starski add electric guitar to the mix and the duet by Nanji and Taylor is well done.  “Never Been to the Reservation” tells the story of the rich man who escaped traditional live and has never experienced the hardships of reservation life.  Juan’s organ and Nanji’s guitar drive this one as Taylor blurts out the minimalistic story.

On “Girl Friend’s House” Taylor plucks and moans as he catches his wife in a same sex relationship and then wants to join in.  “Jae Jae Waltz” is a simple Americana-styled tune of a widow being courted.
Ever amazing us with wild topics, “Gangster and Istatoz Chauffer” gives us the story of an Indian woman with cats who chauffeurs a wealthy gangster.  He loves the chauffer but she does not share his feelings.

“Coming With Crosses” is the story of a mother’s murder by Klansmen who came in the night, as Taylor sings, to “murder his mama.”  Taylor returns on fiddle to help hauntingly build this one up and then slowly draw it to a sad conclusion.  “Green Apples” gives us some cool guitar work and Taylor sings of green apples and lemonade in the morning and red apples and champagne at night.  These are part of his recipe to being treated right.  Miles’ cornet speaks to us here along with Taylor’s voice.  The album concludes with “Sit Across your Table,” a jumpy, swinging cut where Taylor joyfully sings how happy he is to see his wife sitting across the table from him every day.  Three big electric guitar solos are treats here as this amazing album concludes.

Taylor was born in Chicago and moved to Colorado after his uncle was shot to death.  Not a very downtrodden sort of guy, Taylor remains upbeat despite the “heaviness” of the topics of so much of his music.  He joking notes that he is good at dark tones and says "I'd just like to make enough money to buy a Porsche."  Joining Taylor on this album and frequently during live performances is another local Chicago favorite, Anne Harris.  Her ethereal fiddle sounds add to Taylor’s trances and give the listener chills.  I saw them at Buddy Guy’s a couple of years ago doing a version of “Hey Joe” and my skin still prickles at the thought of them doing that cover; it was obviously a memorable performance!!!  If I have any complaints about this album it would only be to feature Anne on more songs!

Taylors’ fans will gobble this new release up; it is another profound set of statements in Taylors’ inimitable style.  Anyone new to Taylor can learn to appreciate the deep roots of his music as it relates to early blues and music from West Africa; hear the listener is also treated to a blending of Native American traditions into the beats and harmonies of Taylors work.  I loved this CD; Taylor has hit another home run with this “lucky thirteenth” release!