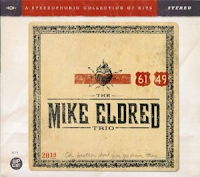 "61 49", named after the legendary crossroads in Clarksdale, Mississippi, was originally released on May 10, 2011 on the small Zoho Roots label.  The L.A. Times called it one of the Ten Best Albums of 2011 while Downbeat Magazine gave it a three-and-a-half star review.   Reissued in January, 2013 on the Rip Cat Records label, the studio-recorded album is clear and crisp with slightly over three-quarters of an hour of eclectic rock, gospel, boogie and blues.
Mike Eldred, previously a member of Lee Rocker's band, wrote all 13 tracks, a testimony to his creative songwriting skills.  His vocals and lyrics range from the gospel-like "Don't Go Down There" where he is joined by the Emmanuel Church Gospel Choir to "She's a Rocket" and "Jimmy, Jimmy" in Jerry Lee Lewis style with Ike Turner on piano.  His plaintive guitar solo in "Ruby's Blues" contrasts with his boogie licks in "Jake's Boogie".  "This Old Train" combines the Latin-style of Los Lobas guitarist Cesar Rosas with Eldred's crystal clear vocals and first guitar.  Elvis' guitarist, Scotty Moore, plays second guitar in boogie style on "Ms. Gayle's Chicken House".

The Mike Eldred Trio is Mike Eldred on guitar and vocals,  John Bazz bass and Jerry Angel drums. All tracks were written by Mike Eldred.  Special Guests include Ike Turner on piano, Kid Ramos, Scotty Moore and Cesar Rosas on guitar, Riley Osborn on B3 Organ and Jeff Turmes on baritone sax.  Although this album may not be “blues” enough for purists, the vibrant energy of each well-crafted track kept me happily replaying the album over and over.  Highly recommended.