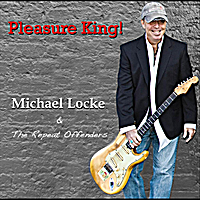 Michael Locke hails originally from Florida where he began playing guitar at the age of seven. His dad was a jazz enthusiast, exposing him to jazz legends like Lester Young, Count Basie, Sonny Rollins, Coleman Hawkins, Joe Pass, Wes Montgomery, John Coltrane, Miles Davis, and Sonny Stitt. His mentors were American jazz guitar player Joseph Louis Diorio and bop jazz trumpeter, flugelhornist, flautist, saxophonist, and composer Ira Sullivan. As a jazz guitar student at the University of Miami, Michael discovered that blues could offer a better avenue of self expression. After moving to San Francisco in the early 90's, he teamed up with bluesman Johnny Nitro who supported him in developing his own blues guitar style and also in setting up his own blues trio.

Over the years, Locke has played his own brand of raw, high-powered blues guitar across the United States, opening for blues legends like B.B. King, The Fabulous Thunderbirds, W.C. Clark, Coco Montoya, Sonny Rhodes, Walter Trout, Ben E. King, Del Shannon, Little Anthony, Jimmy Johnson, Otis Rush, and Chuck Berry. He and his band, The Repeat Offenders, are now based out of Germantown, Ohio where they have created a large fan base regionally in the state of Ohio. Currently backing Michael Locke on vocals and guitar are Stephen Keith on drums, James Higgins on bass, and Da'Rosa Richardson on keyboards.

Their latest release is Pleasure King is a live recording from the blues venue The Ohio Express in Dayton, Ohio where Michael Locke & The Repeat Offenders play frequently. This all to short live blues set is loaded with solid musicianship from the entire band. The disc is a superb blend of blues, rock, funk, and jazz so addictive that it will never leave your media player! I have been fortunate enough to sample all of Michael's music only to find it absolutely riveting. Pleasure King opens with Michael's own title track "Pleasure King," recreating the guitar style of the late great Freddy King, simmering it with a little Steve Ray Vaughan. You will find yourself completely immersed after listening to the first song. If that is not enough to totally captivate his audience, the follow-up, a rendition of the Willie Dixon tune "Too Many Cooks," is a blend of guitar solos with superb use of the whammy bar creating a haunting sound, some funky rhythm guitar, a Latin beat by Stephen Keith on drums, and jazz infused keyboards by Da'Rosa Richardson. At times it sounds like Ronnie Earl and Wes Montgomery could be standing along side of Michael with their axes in hand. Locke's experience and versatility is prevalent as he tears into Albert King's "I Get Evil" SRV style. Switching gears, the band does "Honky Tonk," the rhythm and blues instrumental classic written by Billy Butler, Bill Doggett, Clifford Scott, and Shep Shepherd.  I think "The King Of The Blues," Riley B. King, would be honored to be there to hear his classic tune "You Done Lost Your Good Thing Now" delivered live by Michael Locke & The Repeat Offenders. The band completes the set with the song "Sick And Tired" written by Chris Kenner and Dave Bartholomew in 1957. On this classic blues number, James Higgins lays down a rockin' groove on bass, along with Stephen Keith on drums, in support of Locke's explosive guitar solos and Richardson's honky tonk piano solos.

Listening to Michael Locke & The Repeat Offenders live will leave you exhausted. My only regret with this CD is the fact that I could not be there to experience this world-class show. Buying the CD is next best thing, leaving you hungry for more! You will be hard pressed to find a blues band that sets the bar this high. They are a band you could listen to live all night long.