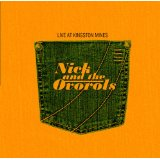 The Chicago-based blues band Nick and the Ovorols is establishing a strong fan base in the Chicago area, as they have performed regularly at the legendary Kingston Mines. The Chicago landmark has been a venue for world-renowned artists like Muddy Waters, B.B. King, Buddy Guy, Mick Jagger, Bob Dylan, David Bowie, Robert Plant, Stevie Ray Vaughan, and contemporary artists like Eddie Clearwater, Joanna Connor, Sugar Blue, and Studebaker John just to name a few.
Nick Peraino is certainly in good company as this rising star has now been added to the list of celebrities. After listening to his CDs or attending a live show, you will understand why he is gaining notoriety in a city known for it's blues legends. Nick moved to the "windy city" from New England to study music in 1998. After finishing college, he toured the Midwest from 2003-2004 with his band Nick Peraino and Blue Moon Risin' releasing his debut album Noisy Picks and Humbars in 2005. He also started touring with Joanna Connor in 2005, playing nationally and locally at Chicago’s Buddy Guy's Legends, Kingston Mines, and The House of Blues. In 2009 Nick was selected by Grammy Award winning blues artist Sugar Blue to join him on a two week tour of Europe to perform in a number of showcase events.
Nick decided in 2011 to once again become a band leader and this time formed his current group Nick and the Ovorols. As a result of establishing a residence at Kingston Mines from December of 2011 to April of 2012, they decided to release the album Live at Kingston Mines from one of their Wednesday night shows. Nick handles vocals and guitar with Carlos Showers also on guitar, Vic Jackson on bass, and Lance Lewis on drums. They open the show with the Mack Rice tune "Cadillac Assembly Line," injecting one of the funkiest rhythm guitar grooves along with one the most electrifying guitar performances I have ever heard in a live show. The only similar version was done by Stacy Mitchart. With Jackson on bass and Lewis on drums, the opening tune is a hard act to follow until Nick explodes with his superb slide guitar expertise on the Nick Peraino hard drivin' roadhouse blues number "Chitown Via Greyhound." On a modified rendition of the Elmore James tune "Dust My Broom," Nick shows his versatility with this great new arrangement. The band takes that funky groove and energy to whole new level on the Barry White hit "It's Ecstasy When You Lay Down Next to Me" written by Ekundayo Paris and Nelson Pigford. The band excelled on the 1965 R&B single "People Get Ready" done by the The Impressions and written by Curtis Mayfield. Adding to his accomplishments, Peraino creates a more contemporary arrangement of the T-Bone Walker classic "T-Bone Boogie." On the Sam Cooke original "Somebody Have Mercy," Nick performs a more traditional blues version like Luther "Guitar Jr." Johnson. The band concludes the set with "Me and My Guitar" by Leon Russell and Chuck Blackwell, reminiscent of Freddie King in his prime. Nick's red hot guitar licks and the band's funky rhythm section make this a night to remember at Doc Pellegrino's Kingston Mines.

After listening to this award winning performance by a very progressive new blues band, Nick and The Overols is a force to be reckoned with. You can add this one to your collection as soon as possible.