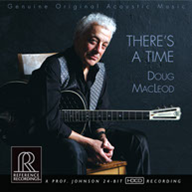 
Over his thirty year career, Doug MacLeod has consistently honored the lessons he learned from legends like Big Joe Turner, Eddie “Cleanhead” Vinson and George “Harmonica” Smith. MacLeod's original songs take a hard,  honest, and often humorous look at world as he sees it. His heartfelt tales are delivered with his masterful storytelling skills, consistently connecting with listeners on deep emotional levels while his immaculate phrasing on a bevy of guitars creates a rich backdrop for his riveting vocals. Nominated for numerous Blues Music awards, including “Acoustic Artist of the Year”, MacLeod is firmly established as one of the reigning masters of the acoustic genre.


The recording was done live in the recording studio by Grammy-winning engineer Keith Johnson, who is known for his ability to capture and accurately recreate the magic of a live performance. MacLeod admits that he initially had some hesitation about this method of recording but the trio quickly settled into a relaxed comfort zone based on their years of playing together. The result is a sonically superior recording that articulates each note from Bott's subtle use of his drumsticks to the notes that ring out of the leader's guitar.


Highlights abound, starting with “Black Nights”, a worrying blues about nightfall and the intense feelings it conjures up. “Run With the Devil” is a descriptive portrait of a man from MacLeod's past who “..played music with a cross-eyed mind.”. The talking blues is set up by sharp slide licks on 'Owl'.  MacLeod paints another vivid picture on “St. Elmo's Room and Pool”, making you feel right at home at a neighborhood joint that offers” ..a fine selection of real cheap blues” in addition to a variety of illegal entertainment options. On “I'll be Walking On”, he delicately picks on 'Moon' while his voice rises in a mournful cry as love fades. The shimmering tones of the 12 string  El Trovador compliment MacLeod's voice as he slips into the falsetto range  on “The Up Song”, delivering a positive message about the power of hope.


MacLeod's wry sense of humor gets a workout on “My Inlaws Are Outlaws” over a light, swinging groove while he takes dead aim at the self-absorbed on “The Entitled Few”, calling out those who ignore the suffering all around them. Another stand-out track revisits a street-corner debate MacLeod had with a zealous ”Christian” over the merits of Biblical scripture and who will receive salvation. “A Ticket Out” is a gentle ballad relating how regret eats away at you when the time comes to end a relationship. On “Rosa Lee”, MacLeod wrings some razor-sharp slide licks from 'Moon' and you can hear how  the three musicians are in perfect sync.


Croy's bass provides powerful foundation on “East Carolina Woman” as the singer expounds on another relationship that left him with a troubled mind. The emotionally-charged rendition of “The Night on Devil's Road” reaffirms MacLeod's mastery as a storyteller. The haunting “Ghost” closes the disc with hair-raising cries and a hypnotic guitar line.


Doug MacLeod has earned the many accolades and honors that have come his way in recent years. He continues to find creative ways to rework the blues traditions, honoring the legacies of the legends he learned from. Keeping in mind that he has over twenty recordings to his credit, There's a Time might be his best yet. He takes us into the darkness, then pulls us out, offering a glimmer of hope that some day we can make the world a better place. Until then, be thankful that we have him around to continue to guide us to look at the world with brand new eyes. This one come highly recommended!