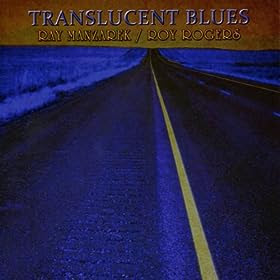 Blues?  Translucent blues? Blues for the 21st century?  Kinda, maybe, sorta, and at times maybe even not really. Cool as all git out? Hell yeah! This CD has some of the best lyrics I've heard in ages.  The stories, torments, desires, pains, and the rest of the gamut of emotions described are pure poetry in action. Manzarek's demonic vocals and hell bound keyboards with Rogers more laid back vocals and strident guitar make this a great CD to listen to.  It ain't all blues, it's stuff Jim Morrison could have sung and made millions off of had he lived, and now it's on a blues album that is not a completely a blues album.  There are blues in there, but this is on the whole is not at all a traditional  blues album.  I hope the mainstream music folks get a whiff of this because old farts (like me) would eat this stuff up.

If one needs to label things, this is psychedelic rock blended with blues and a little jazz.  But so what?  It's still some good music.  The low points for me were the last two songs.  Really nice instrumentals, but the lyrics are what sells the other ten tracks.  These two gents can make beautiful music and do on the final two cuts, but I miss the vocals and lyrics.  They should have perhaps spread them out and not finished with a pair of instrumentals because it just didn't sit right; it comes off as a beautiful afterthought, but still and afterthought.  The first instrumental is the twisted new age jazzy "As You Leave" and the second is "An Organ, A Guitar and and Chicken Wing", a bluesy blast of the past from the future.

Ok, so now that I have that out of me, the other tracks range from whacked out to sad to disturbing to depressing.  It's the late 60's and early 70's all over again, and I am fine with it.  Manzarek's organ and keyboard work along with his vocals make one think this could be the Doors.  Tracks like "Game of Skill" have those classic keyboard lines, guitar work that could be a product of some sort of possession, and Manzarek screams out lyrics in a style beyond demonic possession.  He builds and builds this into a whirlwind of coherent incoherence.  Quite cool. "New Dodge City Blues" has that same Doors-like Manzarek sound, and Ray talks to us about how we're moving into a society that is just like the wild west being reborn.  He tells us things about how things are getting worse and worse.  This is the kind of flavor of stuff rock bands and singers sang about during the Vietnam and Nixon era.  Manzarek draws us some interesting similes.

Warren Zevon and others helped out with "River of Madness" and it is a romp through "the river of madness they call LA."  Rogers takes the lead on singing the verses  and then Manzarek blows it all up with him on the choruses giving this a level of madness fitting to the story.  "Blues In My Shoes" is more traditionally blues; penned by Rogers, we get him singing and playing some mean distorted guitar and Manzarek is as close to barrelhouse as Ray can probably get. "Greenhouse Blues" gives us a jazzy blues approach to a Michael C. Ford set of lyrics set to a bluesy melody that warn us of our global plight.  George Brooks offers up a succulent tenor sax solo on this one.

"Tension" gives us a distorted sounding cut with all sorts of vocal accouterments for both singers who give us some more interesting social commentary.  "On "Fives and Ones" Rogers blows us out with some big guitar and he warns us to keep our pockets full of fives and ones to pay off our markers and to watch out for yourself.  The opening track "Hurricane" is a haunting tale comparing life to living through a hurricane.  A wild ride.

The blues are certainly there as are rock, and jazz; all very psychedelic and transcendental and woven together. This is a tornado-like CD that whips you off into the Land of Oz except you are here on earth and hearing about some of life's worst sides.  I enjoyed this CD a lot- it was transcendental for sure- I recommend this one for everyone who wants to hear what the Doors would be playing if they still were around and what two very talented men who obviously love to make great music together can whip up and deliver.  Go out and get this one soon- you will not regret it and the sooner you get it the more you can enjoy it.

Posted by Crossroads Blues Society at 8:39 AM