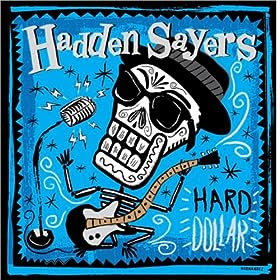 As I do with almost every CD from an artist I am listening to for the first time, I dropped this CD in and listened without looking at the liner notes or promo materials.  I find that I can be a lot more objective by limiting any preconceived notions on my part (other than the visual of an album cover which is hard not to look at, and it's a pretty cool one in this case).  So what I heard was some Texas country-fried blues, served up hot and delicious!  I was very impressed and immediatley listened a second time through, enjoying it even more as I got more familiar with the tunes.  So then I went through the materials and I find out Sayers is from Houston (pretty obviuously a Texan by the song lyrics), everything here is original, Sayers plays some guitar for Ruthie Foster, he moved to Ohio to support his wife's career and things went very far south in his life for over 5 years but things are starting to work out, and he's released a killer CD.  So now that I perhaps have peaked your interest, let's get into this great album.

Sayers is a superb guitar players and has some earthy vocal skills that are just spot on; he sounds like a top notch bluesman.  His Texas country influenced blues are very hot and savory and he writes meaningful and intersting songs.  What is not to like here?  Ruthie even appears on "Back To The Blues", a "slow-jam" blues ballad, and she gives an an extemely nice duet with Sayers.  The groove is almost elegant as they sing of "going back to the blues" with an almost religiously convincing lyrical delivery.  The opening guitar riffs of the first song are almost ZZ Top-like; "Take Me Back To Texas" is a fast honky tonk boogie about Sayer's desire to return to his beloved home state.  This CD grabs you from the start and Sayers sells it with stunning guitar solo work.

"Flat Black Automobile" is quite an intriguing cut; he seemingly uses his spray painted, old car as an analogy for his aging body.  It is an excellent methaphor and an even better song. He wrote the first lines of the song over an decade ago and expanded in it here into a fantastic cut full of pathos and allegory.  "Sweet Texas Girls" is a fun song about his wife and all the Texas women he obviuously adores.  There is a cool music video on his site for this, too.  He follows that with a rocking number entitled "I Got A Crush on You" where he explains his feelings about his woman.  "Ain't Comin' Round No More" has a Willie Dixon-like groove that makes you want to get up and swing to it.  He gives us some nice licks guitar during the solo, too.   He closes the set with "Money Shot", done in a surfing rockabilly Texas approach.  "Burnin' Up" is another big rocker and does exactly what the title states- he just burns it up.

Sayers is joined on the CD by Tony McClung on drums, Mark Frye on bass and Dave DeWitt on Hammond organ.  I was very impressed by Sayers, his band and his music.  This is really an excellent CD that I unequivocably endorse.  Hot rocking Texas blues, laced with some country corn bread and barbeque just to spice things up.  I hope we see a lot more of Sayers and this album could help to get him noticed.  This one is a no-brainer to add to your CD collection if you like great guitar, superb original songs and well delivered and equally well written lyrics!

Posted by Crossroads Blues Society at 8:34 AM