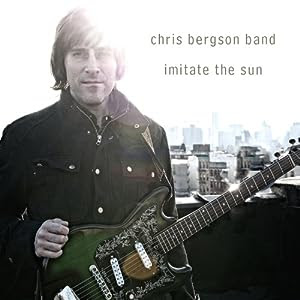 Chris Bergson's sixth release is quite the interesting and enjoyable recording.  Six fine original tracks coupled with four well done covers gives us a beautiful glimpse of the talents of this fine young musician.  Born in NYC, raised in Massachusetts and back in NYC for the past 16 years, Backed by his trio and other superb performers, Bergson's CD warrants sifting through it track by track.

Chris opens with a rocking tune that reminds me somewhat of The Band.  A slow groove with a distinctive beat, it is like a romp through a meadow.  He sings of going home to stay with his one trough love, and it sold me immediately.  "Imitate the Sun" features Bergson backed by Jay Collins of sax, whose presence here makes this title track memorable.   Bruce Katz adds some fine keys, too, but Bergson's emotional vocals stand up with the great sax solos and round out this cut.  Bergson turns to the country with the net track, "Shattered Avenue".  The lyrics are touching, describing a man whose life amounted to living in "a life of luxury overlooking a KFC".  He picks and sings mournfully; this simplistic approach is really well done.

He gets funky with "Hello Bertha", adding Kenny Rampton on trumpet and Chris Karlic on baritone sax (they also appear on "Mr. Jackson").  The horns are in sync, but Bergson drives this one with a nice guitar line as he sings of his woman of ill repute who provides a needed service.  Bergson then gives us his take on the Howlin' Wolf/Willie Dixon song "Down In The Bottom". Katz on piano fills in nicely here again, but it is Bergson's solo guitar work that is clean and strong with his gritty vocals that made this one complete.  He goes country again with "Layin' It Down In White",  a song where he sings of taking out the Christmas tree as a simile for the end of his relationship. Simple yet solid work once again; he is melancholy and morose, reserved and reticent here.  He shows that a guy from New York can deliver a real country song so much better than the myriads of pop country singers who try to sell the same songs over and over again.

An homage to Bessie Smith comes next.  Katz's piano is a prominent player in this song.  Bergson's vocals are a throwback to the day of tis song, too, and then Collins comes in with some nice flourishes on sax.  As if that were not enough, Bergson then comes in a plays his guitar with a ukulele's-like slide sound guitar.  After strolling through this he gets hot and heavy with "Mr Jackson".  The horns are out in force and the guitar is stinging here as is the organ.  Jackson is a fictitious street character about whom Chris gives us a cool story to listen to.  Elmore James' "Dust My Broom" comes next, and he trades in the traditional slide for a biting direct guitar and Katz' brilliant piano work.  Bergson closes with Dylan's "Standing In The Doorway"; he strips down the presentation again and goes the simple route. He does build up a bit with Katz on organ as the track goes along, soulfully and emotionally going on for over eight minutes, yet it never seem to drag.

Matt Clohesy is the bass player here and Tony Leone on drums.  They are seemingly transparent at times, but keep every track in line with their strong work.  This is some fine blues and roots music given to us by a young and expressive guy from the New York/New England side of the woods.  His approach and sound are impeccable and authentic.  You will fall in love with the sound and emotion here as I did- solid blues with an original and outstanding approach.  I recommend this one highly- it gets better and better every listen!

Posted by Crossroads Blues Society at 8:11 AM