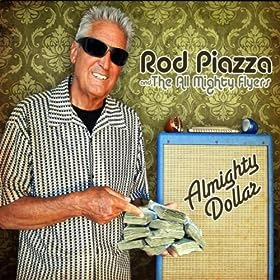 Part of the blues community is, I believe, infected with the “Johnny Lang” syndrome. We have our ears to the ground in hopes of finding the next and youngest new thing to squeeze the life out of in an effort to “keep the blues alive.” In this pursuit, we sometimes overlook the work of blues artists who have been “doing it” for several decades. My first listen through with the new Rod Piazza CD convinced me that we ALSO need to not take for granted artists that were “new” 20 years ago. Almighty Dollar is a CD worth owing. It’s a good, quirky, fun and well done affair.

The current Flyers are stripped down to the ubiquitous Honey, Henry Carvajal (guitar), and Dave Kida (drums). Bass chores on the CD are split between Norm Gonzales on electric bass and Hank Van Sickle on upright. Johnny Dyer sings two cuts and Rusty Zinn adds lead and rhythm guitar pretty much throughout the CD. Jonny Viau adds tenor sax on  six cuts that is SO restrained you might miss it on a small system.
The Hollywood Fats sounding, Jimmy Liggins “Move Out Baby” kicks off the CD. In case we’ve forgotten why we like RP & MF in the first place, this will bring it all back: the jumpin’ beat, rockin’piano, and big chromatic harmonica riffs are all here. “What Makes You So Tough” is another tongue in cheek tune aided with gospel tinged backup vocals.  The liner notes don’t indicate who exactly the choir is, perhaps Rod doubled but they sound oh-so female?? Piazza accomplishes a nice growl for a song there titled “Blues Shadows.” Piazza and Zinn own this song, but the Flyers prove they are a great backup band as well. “Wine, Wine, Wine” is a nice atmospheric tune: Piazza waiting for the floor show, drinking wine, and getting in the mood, which, by assimilation, gets us In the mood as well. The old standard “Ain’t Nobody’s Business” gets the Rod treatment. I should mention that this CD sounds great on a nice system, where the intimacy of the stripped down arrangements pull us in to the overall atmosphere of the disc. Next up is Little Walter’s “That’s It.” Again, the Flyers nail it. Another “move out” song follows which makes me wonder, oh never mind, its blues. “Baby Don’t Go” shows how Piazza’s voice has mellowed over the years. Is he becoming a crooner? I won’t say. Dyer is back for Muddy Water’s “Lovin’ Man,” and he sounds scarily like the man himself – nice job. The Piazza-penned “Almighty Dollar” is next up. The story is universal: “can’t you hear me holler; chasing that almighty dollar?” Zinn and Carvajal trade tasty guitar on this tune.  Listeners may be shocked by song ten, which drips of ‘50s doo-wop. “We Belong Together” even has the talked response to the vocal line. Cute, quirky or cliché’? I don’t know that I’ve heard “Confessin’ The Blues” since that last time I put on 12x5, but it sounds so good hear with Johnny Dyer on vocals and the Flyers proving they were and ARE a great blues band. The CD closes with another Piazza-penned instrumental called “Con-Vo-Looted.” Here Piazza does what he does best, play great harmonica.

Truly, listening to this CD made me say to myself, why haven’t I kept up with is band? Though not all blues, thematically the CD is blues-based and cool. Piazza still has some tricks up his sleeve. His voice has mellowed the band is tight as ever and the stripped down treatment is, indeed, a treat. Those listeners who bailed after the Holmstrom, Stuve, Mugalian exodus should check out this CD. RP & MF have not slowed down a bit.

Posted by Crossroads Blues Society at 8:33 AM