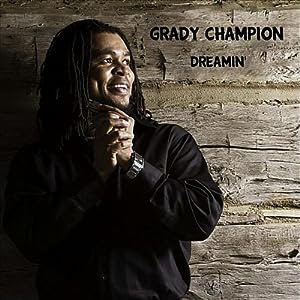 Grady Champion is the IBC winner for top band and one can see the energy this band puts out in their performances even here with this studio recording. Champion bliows a mean harp and has a rustic, throwback to the Delta plantation singing style. The album showcases Grady and the band with ten new tracks all written or co-written by Champion. He hails from Canton, Mississippi and his stated mission is to keep the blues alive, a task he really has taken to heart.
This CD gives us a group of new songs that blend Champions blues and funky sound together. I really liked his harp work. Vocally he's got a unique style that is very rough and tumble. Champion starts the set with "My Rooster is King". This song reminds me of the old style songs with repetitive lyrics so the crowd at his live shows can sing along or do a call and response. Champion used this song at the IBC finals to showcase his band. "Weight of the World" is a ballad of slow blues where Champion shows us what he can do with the down tempo stuff. "Same Train" is another cut that hearkens to the songs of the 50's when the blues got electrified. Champions unique vocals growl and grumble with charm throughout. "Thank You for Giving Me the Blues" features a nice guitar solo opening in a song where Champion gives us a traditional 12 bar song where he thanks God for being able to do what he does and all that he has. He transitions from slow blues to a Gospel approach mid way through with the repeated bridge and chorus. The last track features what sounds like one of the male backing vocalists giving us a spoken accompaniment to the groove being laid down by Grady's harp and the band- very 70's-like, a la the West Coast.
Zac Harmon and Christopher Troy produced this album at Our Own Studio's West in Los Angeles and Our Own Studios South in Dallas. There are a few minor technical flaws with the CD sound and mix, but over all it is very clean and bright. A couple of the tracks sound like they were recorded in a small and reverberant room, well beyond the sound of a small club. The other issue is the backing vocals are mixed at the same level as Grady, making it more a choral performance than backing vocals. But these are small issues- they sing wonderfully together despite the mixing issue.
Along with Grady on the CD are Zac Harmon and Gregg Wright on guitar. They are hot- at times I think they even "stole the show", so to speak. Very nice accompaniemment and they offer some wicked, wicked solos. Christopher Troy is on keys and drums, and Harmon also does some drum work. The bass player is Buthel. Backing vocals are done by Sue Ann Carwell, Zac Harmon and Cedric Goodman; while they are in the foreground (especially Carwell's), they are good vocalists.

If you have been a fan of Champions' or loved him live on the road or at the IBC's then you will need to get this CD for your collection. He certainly is a man on a mission.

Posted by Crossroads Blues Society at 8:10 AM