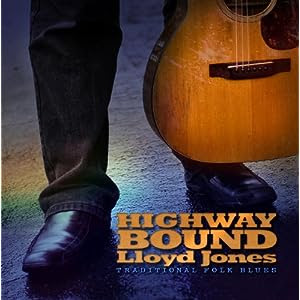 Lloyd Jones, from Portland, Oregon, has been on the acoustic solo blues scene since the early 1970’s. He has released seven albums and toured many other countries besides the USA.  While doing this he has received much praise and also gained fans that enjoy his music. Besides performing at blues festivals and other blues venues he is with the annual Sandy Beaches Cruises.
Lloyd’s new album, “Highway Bound, is collection of 16 fine blues tunes. Three of his original tunes are featured in the mix. On this recording, Jones gives us the opportunity to enjoy his take on shuffles, slow blues, country blues and a little ragtime. Starting us out in a big way is “Travelin’ On”, written by Lloyd Jones. This song takes you down the road with his fine finger picking guitar licks. Lloyd has that true blues sound and feeling to his vocals and lyrics. He has the heartfelt quality to his songs that only comes from years of singing, writing and playing the blues. The guitar rhythm on “Travelin’ On” just seems to pull you along on the road that’s traveled here.

John Prim’s tune, “Ice Cream Man”, is a special treat as Charlie Musselwhite was invited to play harmonica on it. The lyrics to this song have that special double meaning to them that many blues tunes contain. This was one of my favorite picks from this recording. I also enjoyed Lloyd Jones’ take on Broonzy’s, “Key To The Highway”, which is more upbeat and moving than most versions of it. Jones does justice to Blind Willie McTell’s “Broke Down Engine”. One has to take a long listen to his rapid finger picking licks on this tune. This is really some good blues stuff.

Featured on “Lazy Bones” is Curtis Salgado and his powerful harp playing. This addition to “Highway Bound” was really a good choice for Lloyd to add to the recording.
Every tune on the project, “Highway Bound”, is really good and showcases a fine blues artist in Lloyd Jones. He is a very talented finger pickin’ guitar player, a true heartfelt blues singer as well as a fine song writer. When this CD comes out of the cellophane wrapper and is listened to, there is not a doubt that it is a true blues recording full of feeling and the history of the blues. Lloyd Jones proves to us that he is a real bluesman with “Highway Bound”.

Posted by Crossroads Blues Society at 8:15 AM