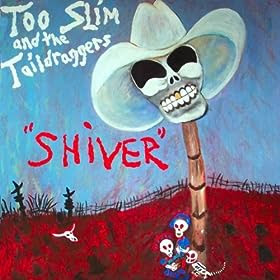 Shiver
Too Slim and The Taildraggers
Underworld Records
Www.tooslim.org
12 Tracks

Too Slim and the Taildraggers are celebrating their new release Shiver their 10th studio album, as well as celebrating their 25th year of touring worldwide. Their last two releases, Free Your Mind and The Fortune Teller charted on the Billboard Top Blues Chart a total of 17 times reaching as high as #5 and #9 respectively. Shiver features guest performances by BMA award winner Curtis Salgado, Duffy Bishop and the Texas Horns led by Mark "Kaz" Kazanoff. The band has sold approximately 100,000 albums since they formed in 1988. Too Slim and the Taildraggers have won over 30 Northwest Music Awards.

Shiver is a collection of hard drivin', heart poundin', foot stompin' roadhouse blues.  Too Slim and the Taildraggers pack a powerful charge for a three piece band. Tim "Too Slim" Langford founded The Taildraggers in Seattle in 1986, and is still going strong some sixteen albums to his credit. This latest CD showcases his technical ability as a guitar player once again as well as his ability as a superb song writer. With Langford on guitar and vocals, Polly O'Keary on bass, and Tommy Cook on drums, this power trio introduces us to quite the collection of talent within the confines of these twelve originals. The cd opens with "Stoned Again" featuring a simple roots intro before he explodes into one of his fiery slide blues tunes. Langford's gritty vocals tell a tale of a gunrunner's fate in "Daddies Bones." Langford brings in the Texas horns and displays his superb guitar ability on tunes "Can't Dress It Up," telling us you can't be someone you're not, while "She Sees Ghosts" is the strange tale of a dog who does just that! "Too Slim" once again displays that hard charging slide guitar on "In Your Corner" and the political statement "Workin" telling us "cheap talk don't pay the bills." Curtis Salgado the "eternal optimist" is the featured vocalist on the tune "Everybody's Got Something," and reassures us that "everything's gonna be alright!" "Inside Of Her," showcasing the "love of his life" features Joe Doria on the Hammond B-3. "As The Tears Go By" and the title track "Shiver" are blues/rock masterpieces showing the depth of Langford's guitar skills. "Shiver features Duffy Bishop on vocals and Austin Elwood Langford on lead guitar. Shiver concludes as well as it begins with the instrumental "Bucerius."
This latest CD is the culmination of the talented "Too Slim" Langford and his long term career as blues performer. Hopefully it will continue for years to come.

Reviewed by Rick Davis
Posted by Crossroads Blues Society at 8:45 AM

Thanks for taking the time to review Shiver!

We review all the CDs we get. Our reviewer really enjoyed this and I am looking forward to hearing it!