Edge of the World reviewed by Mark Thompson 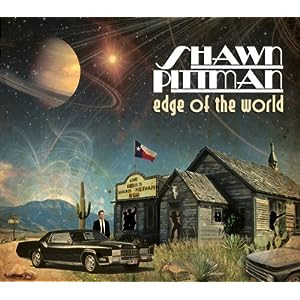 Shawn Pittman, guitarist/singer/song writer/ and an Oklahoma native began his music career at the age of eight by playing piano. By the age of 14, he had picked up the guitar, having been influenced by artists Jimmy Reed, Elmore James and Albert King, and was also introduced to the music of Lightnin’ Hopkins and Muddy Waters by Braken Hale, a good friend who later collaborated with Shawn on writing material on his albums. After moving to Dallas Texas at the age of seventeen, he was introduced to Sam Myers who served as his mentor. Pittman stated, “Sam Myers was one of the best musicians I’ve ever played with!” Pittman was also inspired by local musicians Mike Morgan and Hash Brown. His first album was Blues From Dallas, recorded in 1996, only to be remade in ’97 as “Burnin’ Up” on the Cannonball Records label.
Edge Of The World marks Shawn Pittman’s tenth release and contains material inspired by the early raw sound of the blues recordings of the 50's and 60's. Shawn's opening statement reinforces this influence. "My favorite records are those from the 50's and 60's. Back when sessions were recorded with minimal technology. There was a warm sound that they were able to achieve and that I miss in recordings today. There was more of a live sound and certain soul that reverberated through those records." Since there was no budget for studio or musicians, Shawn rented equipment and completed this project at home. Shawn amazingly plays virtually every instrument on the CD including vocals, guitar, bass, drums and piano as well being as the album's producer and engineer!
Special guest Jonathan Doyle of The Mighty Blue Kings, Jimmy Sutton’s Four Charms, and White Ghost Shivers) represents the album's only other personnel by contributing tenor & baritone saxophone and horn arrangement on four songs. When asked to comment about a project of this magnitude, Pittman simply states “I’m just playing the music I want to hear!”

With a distinct guitar style and vocals similar to those of  Andrew Duncanson of The Kilborn Alley Blues Band, Edge Of The World opens with a Chester Burnett tune "Sugar (Where'd You Get Your Sugar From)." The remaining tunes are penned by either Pittman, Braken Hale, or friend Lewis Dickson. "Leanin' Load" and "Scent of Your Benjamins" seem to have a little Jimmy Vaughan/Jimmy Reed influence in Shawn's guitar solos. "Almost Good" brings in Jonathan Doyle on sax with Pittman creating a pure 50's sound. "One Of These Days" gives us an incredible swamp boogie sound created once Shawn's unequaled talent as a singer and musician. The title track "Edge Of The World" and slow blues tune "That's The Thing" really bring Shawn's guitar expertise to center stage! Pittman adds a fabulous tune "I've Had Enough" that could be a page right out the Elmore James songbook.  "Maintain," "This Time," and "Something's Gotta Give" add to that Texas blues sound so prevalent the throughout the cd. Pittman completes Edge Of The World with a very roots based tune "Somebody Gonna Lose, Somebody Gonna Win" and acoustic number "If I Could (Make The World Stop Turning)."
What an accomplishment to complete this incredible one man collection of Texas, swamp, 50'/60's sounding blues cd. It has all the qualities of a five or six piece group. You will be amazed when you hear this cd!

Posted by Crossroads Blues Society at 8:23 AM