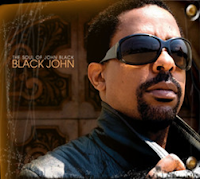 Funk, country and blues are married expertly by producer and former Fishbone/Miles Davis axe-man John Bigham (aka John Black or Black John) on this superb CD from Randy Chortkoff and the folks at Electro Groove Records. Bigham calls this country-funk; I call it some really hot music. The band member’s bios read like the recording industry Hall of Fame and they do a great job together. It’s hard to call CD’s like this “blues” because they are far from the traditional and contain other styles of music. But it an exceptional piece of work that blues and funk fans will both love. Even the advertising material is cool; it’s all retro-ed out, blacksploitaion movie-styled stuff.

Comparisons of the title track and the traditional “Stagger Lee” have already been made by far more famed reviewers than I. Suffice it to say that this song opening the album sets the stage for a great ride through 12 tracks that display the talents of this exceptional artist.

Bigham’s guitar and vocals grunt and groan through funky tracks like “White Dress”. I think he’s at his best the funkier he gets. In the single “Betty Jane”, Bigham commemorates and lusts after Miles Davis’ wife (who was a singer in her own right). “Last Forever” mixes acoustic blues and full blown funk in quite the interesting way. The song shifting from acoustic guitar to electric and then a full blown production is pretty cool. It’s like a four and a half minute history lesson from the Delta to today’s streets of LA.

But even when the funk is dialed down and goes more towards a straight up soul sound, John delivers. The final cut “Thinking About You” is just Bigham and acoustic guitar, but it is equally as powerful as the bigger production pieces.

I loved this CD. Soul, funk and blues delivered with a little country flavor. I think Bigham and the folks at Electro Groove have a real winner here!
Posted by Crossroads Blues Society at 11:14 AM