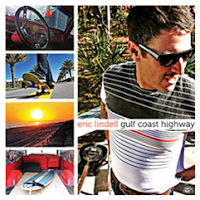 I first listened to this CD on a Sunday morning. It was quite early, and I had just gone to a hockey game the night before, so the sport was still on my mind. As the CDs first track opened up, it immediately got me thinking about partying. I quipped to myself, “I went to a party and an Eric Lindell concert broke out,” and it hit me; I’ve bent the joking phrase, “I went to a fight and a hockey game broke out,” around, but it fits so nicely. Seeing Eric live or even listening to him on a CD makes you feel like having you’re having a party.

I first met up with Eric in 2005 at One Eyed Jacks in the New Orleans’ French Quarter. His first CD for Alligator had just been released and I was reviewing it for our newsletter and loved it, so I made my way to the late Sunday night show at One Eyed Jacks. On break I briefly chatted with Lindell and found him to be quite the laid back guy, just like the music he plays. I’ve met up with Eric a few more times since then and I’ve enjoyed his work immensely. This latest CD is an extension of a great body of work that this young guy is developing.

The fusion of Southern California and New Orleans is what Lindell sells so well. The surfer boy goes cajun flavors of his music are just prime. Gracing the cover and insert are pictures of his tricked out 1965 Chevy panel truck, and his surfboard.

Twelve originals and three great covers are featured. “It’s a Drag” is a rocking number that is quite the track, and it is followed up by an equally impressive slow and sexy cut “Lullaby for Mercy Ann.” I’d have to say these were probably my favorites of the strong new tunes. The country covers are equally interesting. Waylon’s and Willie’s “I Can Get Off On You,” Delberts’ “Here Come the Blues Again”, and Buck’s “Crying Time” all get “swampified” by Eric and his crew. The CD closes with some great guitar licks between Lindell and Chris Mule and some hot Jimmy Carpenter sax work on the instrumental “Raw Doggin’.”

An added treat is the addition of Jimmy Carpenter’s and Derek Huston’s saxes and Marc Adam’s B3 organ and piano on each track. The lushness of the orchestration of Lindells’ swamp popping boogie has improved album to album, and this new effort is the best yet. Kudos to Eric and the folks at Alligator for their efforts making a great sounding CD. While this is certainly not mainstream blues, the future is somewhat secure with guys like Eric and his band mates running around!
Posted by Crossroads Blues Society at 11:17 AM