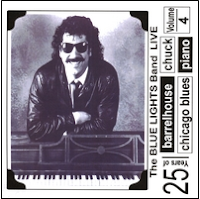 This is Barrelhouse Chuck’s fourth volume of 25 years of music that he has appeared in around the city with a veritable host of blues greats. This volume is live with the Blue Lights Band. Live music, recorded off of good, bad and indifferent clubs’ sound systems, with and without crowd sounds; the songs each give us a feel and grit that is the blues scent that Chuck has lived and recorded for posterity to enjoy. Basically, what we have here are five sets of artists (plus or minus a body here or there) with some mean and evil performances recorded live at clubs around Chi town to make up this CD.
The album opens with Wild Child Butler doing the intro and talking to the crowd about what the blues really are. He then announces that the first number is “Chicago Bound.” As it turns out, Jimmy Rogers leads Chuck, Hip Linkchain, Steve Arvey and Ted Harvey through that song as the first tune on the CD. It’s a great opening for some even better performances!

Johnny B. Moore plays lead guitar and sings on the next track and also appears on several others. The sound on these tracks is really greasy and dirty, what Chicago blues sounds like at its’ late night best. Those tracks are “Straight from the Shoulder’, “Ain’t Superstitious” and “On My Way to Memphis”. Along with Johnny and Chuck are Willie Kent, John Tanner, and Tim Taylor are the band. The same guys (along with Willie D avis on guitar) back up Bonnie Lee on “Sad and Evil Woman” and “Looking for a Goldmine”.

Robert Hunter sings and plays the horn on Little Richard’s “Tutti Fruity”. A distorted set of vocals only sells the live song’s appeal even more. It sounds authentic to its’ roots, an old, little West or South Side club with an overdriven PA being stressed to the max with some high energy music behind it. Sylvester Newton, Jack Cook, John Tanner and Leslie Milton join Chuck and Hunter on this one and another tune by Little Richard, “Lucille”. Hunters screams offer a god cover of the original while Chucks keys ring true.

Billy Flynn delivers some mean guitar in the slow blues instrumental “I Wonder Why”. Flynn, Chuck, Kent, Tanner and Taylor also appear on “West Side Baby”, “Willies Boogy” and also on the bonus track, Willie Kent’s “Mamma Told Me”. S.P. Leary replaces Tim Taylor on the skins on that one. All these tracks are hot stuff.
The last assemblage of blues greats features Hip Linkchain on guitar and Frank Bandy on bass with Chuck. One track is the James Cotton instrumental “Lightnin’” with Little Joe Benson delivering some mean harp and Leary on drums. The other is “Suzie Q”, featuring Huckleberry Hound on drums, Rich Kirch also on guitar and Hip’s vocals. Great music again.

I have but one complaint with the CD. I’d love to know where and when the tracks were recorded. The liner notes give us the artists but not any other information. Aside from that tiny flaw that can be easily fixed, this is a nice set of tunes that will get the listener into the mood and sound of the real deal of what the blues scene sounded like 30 odd years ago.

Thanks go out to Chuck for preserving this music from many of the greats of Chicago’s blues who unfortunately have left us. If you like your blues served up on a plate of grease and grime, this is a CD you need to add to your collection.
Posted by Crossroads Blues Society at 11:20 AM