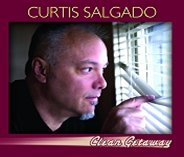 Curtis Salgado has a story to tell, one that includes a liver cancer diagnosis and mere months to live unless he had a liver transplant. Thanks to the efforts of musicians like Taj Mahal, Bonnie Raitt and Robert Cray as well as a legion of friends from around the world, close to half a million dollars was raised to cover the cost of the successful surgery. Now the singer who inspired John Belushi to form the Blues Brothers Band celebrates his medical miracle with a rousing new release that clearly proves the extent of Salgado’s talents.

Back by the Phantom Blues Band, Curtis explores the roots of American music, proving to be adept at down-in-the-alley blues. He funks it up on the title track, a tribute to Johnny “Guitar” Watson, his vocal soaring over the horns and deep bass groove. Another original, “20 Years of B.B. King”, features a lyrical narrative formed from the titles of various King songs, with a chorus that states “ I’ve learned more about the blues in two weeks from you, than 20 years of B.B. King.” Salgado’s performance is so compelling that you quickly ignore the novelty factor of the tune. The band cuts loose on “What’s Up With That” and “I Don’t Want to Discuss It” but Salgado shows that his voice has retained the power and gritty edge necessary to match the raging ensemble.

Curtis is even more impressive when he delves into deep soul music. Not many singers have the nerve to cover one of Al Green’s classic tunes but Salgado takes on “Let’s Get Married”. He sings with a deeper tone than Green and turns in a performance that comes close to the original without simply copying it. Equally fine is the Hi Records feel on “Drivin’ in the Drivin’ Rain” with Salgado’s vocal pleading with a growing intensity. Further proof of his talent is delivered on “Who’s Lovin’ You” as Salgado’s voice swoops and soars with ease as he tells this tale of emotional heartbreak. “Alone” is a smooth soul ballad with another magnificent vocal performance from Salgado as well as a taste of his harmonica playing.
Surrounded by a bevy of world-class musicians and twelve outstanding tunes, Curtis Salgado turns in the best recording of his career. The passion and joy he pours into each track overshadows everything going on around him. Based on this disc, Salgado deserves to be placed in the top tier ranking of blues/soul singers. Highly recommended - not to be missed !!!!
Posted by Crossroads Blues Society at 11:24 AM