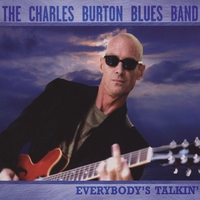 The 16 song second recorded outing from the Charles Burton Blues Band is another satisfying outing showcasing Burton’s guitar and song writing chops. Burton’s playing on his first CD,I Wouldn’t Lie To You, was a little more versatile, with his running through jazz-to country-to blues-to rock chops. On Everybody’s Talking, Burton focuses more on the songs. I am one of a rarer breed who listens to lyrics before anything else when critiquing a CD. One of my many beefs with modern day songsmiths is too much emphasis on the song or the meter and not the “story.” This is all the more true in the blues genre where it seems to be about guitar soloing. Burton, however has assembled some clever-to-downright funny tunes on ET. The disc kicks off with a fine example about two-timing entitled “Fat, Dumb, and Happy.” Where he owes some influence to Chuck Berry here, the next two songs, “Black Market Woman” and “Baby’s Got it Bad” lean more toward the Stones, riff wise. One of my favorite tracks is song 4, “Still Get Together” with it’s doubled guitar riffs and thick sound. Burton claim’s that song 5, “Pop The TrunK” is a west coast hit (the band is from the San Diego area). It is a dance song that would bring a smile to even Rufus Thomas. “Hook, Line and Sinker” is a funny tongue-in-cheek warning to an ex because he’s “the one that got away.” The aptly named “Tiki” is an instrumental where Burton takes his Wes Montgomery licks to a lounge. “Love That Guitar” is a hot picking tribute to guitar players too many to name and reminds us of the sort of fiery country licks Burton displayed on his first CD. “Heavy Hearted Blues” is a fooler; initially it seems to be a slow blues, but when the rhythm section kicks in it get double timed and becomes two meters in one. “Swamp Rat” is another funky tune allowing Burton to let loose with some really “Creamy” guitar work (and I do mean the cap). Songs 13 and 14 are both instrumentals and I wonder why this choice. “Little Jennifer” is a slow, atmospheric nod, perhaps, to SRV’s “Lenny.” Followed by “Trouble Head,” the most closely near-traditional blues Burton contributes, one hopes he isn’t running out of ideas. This IS a hefty undertaking--16 original songs. But alas, to these ears, Burton does seem used up by the end of song 16--”(the) Old Fashioned Way which with it’s uses of a harp mike and references to ukuleles becomes and old-timey piece for a guy who is indeed a force to reckoned with.

Don’t get me wrong, I am a HUGE fan of Charles Burton. I think he has something to say with his guitar; he is the master of many styles of playing; and that he is a clever and unique song writer in the school of Mem Shannon and Larry Garner. Had he left off “Little Jennifer“ and “(The) Old Fashioned Way,” the CD would have been tighter and as complete wouldn’t give the impression of fizzling out after song 12. There certainly is enough good stuff here to recommend a purchase, and on my next return to So Cal, I will definitely try to catch this band live.
Posted by Crossroads Blues Society at 11:13 AM