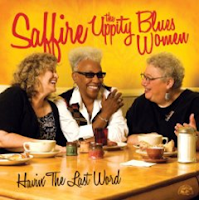 Can this really be the end of Saffire? Are the ladies really hanging it up? The gals and record label have touted this as their last studio CD, and if it is so I am saddened as is the Blues world in general.

Saffire has been around for a quarter of a century now. Founded in 1984, the band originally formed when Anne and Gaye hooked up in Virginia and performed as a duo. Ann was teaching Computer Science because music did not put bread on the table. Earline Lewis was her student one semester and missed an exam when her father passed away. Ann administered a make-up exam at Earlene’s home. Earlene was a bass player and Anne saw that Earlene had a piano for her to play (remember that Anne only started to learn piano at 35) when she brought the exam to Lewis’ home. Ann and Gaye practiced at Earlene’s home, Earlene joined in the fray with her bass and that pretty much started them on their way as a trio. Earlene left the band in 1991 and it was back to duo status. It was time to release another record in 1992 and Andra Faye was asked to come into the studio to help record the new CD “Broadcasting”. She fit right in and has been with Saffire ever since. The band is currently on their final tour, promoting this new CD.

This CD is a natural extension of Saffire’s music. All of their stuff is blues; some of it is full of humorous blue double entendres while other songs focus on biting issues and life’s conditions. This CD is full of the types of songs that have marked their success , yet they are not tired nor repetitive. They showcase the bands’ continued ability to be on target, whether funny or poignant, sensitive or risqué. The ladies give us sixteen strong cuts here; they are leaving us as a group while at the peak of their game.

The CD begins with the ladies swapping off on vocals and instrumental solos on the upbeat “I’m Going Down to the River,” a song about individual spiritual cleansing and renewal. This hearkens to the time after the band is no more, where “everything will be all right.”

Double entendres abound in “Kitchen Man,” where Ann ribaldly sings about lovin’ her kitchen man’s frankfurter and sausage meat. Gaye’s “Bald Eagle” laments that her purty little poodle dog and purty little silver beaver died, but that she has a new pet– a bald eagle; just wait ‘til it spread’s it’s wings! “Too Much Butt” features Andra singing about, well, I think it’s obvious. The gals show us that their keen sense of humor is thankfully as inappropriate as ever!
Beating cancer is the topic of “Bald Headed Blues,” where Gaye blasts out a great tune about beating cancer and the effects of chemo therapy. “I’d rather be hated for who I am than loved for who I’m not” is the theme of “Nothin’ in Your House,” another great Agdebalola cut that talks about not judging others.

“Somebody’s Gotta Give” and “Blue Lullaby” feature Andra at two ends of the vocal spectrum. The former is more upbeat while singing about relationship issues, while the latter is a slow, harmonious, bluesy lullaby, hearkening to the songs of Loretta Lynne and Patsy Cline.

“Travellin’ at the Speed of Love” and “Haste Makes Waste” feature Ann at her barrelhouse piano and sultry vocal best. She is really the queen of this style of music!

The CD closes with Deanna Bogarts’ “I’m Growing Older” and then Ann’s “Bad Times.” Andra delivers the goods on Bogarts’ quasi-humorous tune about aging; she’s just “fine getting old.” Ann them finishes with an original number about the struggles and bad times the women have been through and how they overcame them all. It is a sad testament to their breaking up and going separate ways. Rather than close the review with more thoughts on this, I offer the lyrics from the chorus of this song:
"Bad times make the good times better,
Bad times make our love grow strong.
If we can keep on holdin’ on together
Good times will be here before long."
Posted by Crossroads Blues Society at 11:15 AM